Is The War Over Nagorno-Karabakh Already At A Stalemate?

Is The War Over Nagorno-Karabakh Already At A Stalemate?

By Moon of Alabama

Seven days after Azerbaijan attacked the Armenian held Nagorno-Karabakh territory it has not made any territorial progress. 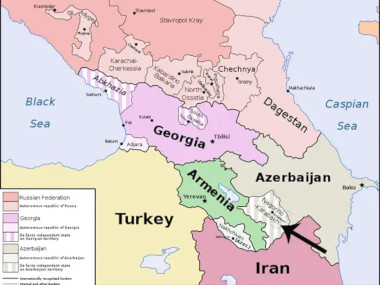 Iran and Georgia have both large Azeri and Armenian minorities within their territories.
bigger 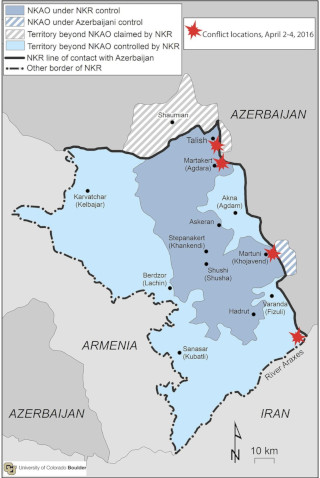 The highlands of Nagorno-Karabakh are ethnically Armenian. The light blue districts were originally Azeri but have been ethically cleansed during the war in the early 1990s.

Turkey is supporting Azerbaijan by supplying it with Turkish drones and with 'moderate Syrian rebel' mercenaries from Syrian and Libya. All are flown in through Georgian air space. Other mercenaries seem to come from Afghanistan. Additional hardware comes by road also through Georgia. Another supporter of the attacker is Israel. During the last week Azerbaijani military transport aircraft have flown at least six times to Israel to then return with additional Israeli suicide drones on board. These Harop drones have been widely used in attacks on Armenian positions. An Israeli made LORA short range ballistic missile was used by Azerbaijan to attack a bridge that connects Nagorno-Karabakh with Armenia. Allegedly there are also Turkish flown F-16 fighter planes in Azerbaijan.

Turkey seems to direct the drones and fighter planes in Azerbaijan and Nagorno-Karabakh through AWACS type air control planes that fly circles at the Turkish-Armenian border.

The attack plan Azerbaijan had in mind when it launched the war foresaw taking zones of several miles per day. It has not survived the first day of battle. Azerbaijan started the attack without significant artillery preparation. The ground attack was only supported by drone strikes on Armenian tanks, artillery and air defense positions. But the defensive lines held by Armenian infantry were not damaged by the drones. The dug in Armenian infantry could use its anti-tank and anti-infantry weapons to full extent. Azerbaijani tanks and infantry were slaughtered when they tried to break into the lines. Both sides had significant casualties but overall the frontlines did not move.

The war seems already to be at a stalemate. Neither Armenia nor Azerbaijan can afford to use air power and ballistic missiles purchased from Russia without Russian consent.

The drone attacks were for a while quite successful. A number of old air defense systems were destroyed before the Armenians became wiser with camouflaging them. The Azerbaijani's then used a trick to unveil hidden air defense positions. Radio controlled Antonov AN-2 airplanes, propeller driven relicts from the late 1940s, were sent over Armenian positions. When the air defense then launched a missile against them a loitering suicide drone was immediately dropped onto the firing position.

That seems to have worked for a day or two but by now such drone attacks have been become rare. Dozens of drones were shot down before they could hit a target and Azerbaijan seems to be running out of them. A bizarre music video the Azerbaijanis posted showed four trucks each carrying nine drones. It may have had several hundreds of those drones but likely less than one thousand. Israel is currently under a strict pandemic lockdown. Resupply of drones will be an issue. Azerbaijan has since brought up more heavy artillery but it seems to primarily use it to hit towns and cities, not the front lines where it would be more useful.

It is not clear who is commanding the Azerbaijani troops. Three days ago the Chief of the General Staff of Azerbaijan was fired after he complained about too much Turkish influence on the war. That has not helped. Two larger ground attacks launched by Azerbaijan earlier today were also unsuccessful. The Armenians are currently counter attacking.

In our last piece on the war we pointed to U.S. plans to 'overextend Russia' by creating trouble in the Caucasus just as it is now happening. Fort Russ notes:

The current director of the CIA, Gina Haspel, was doing field assignments in Turkey in the early stages of her career, she reportedly speaks Turkish, and she has history of serving as a station chief in Baku, Azerbaijan, in the late 1990s. It is, therefore, presumable that she still has connections with the local government and business elites.

The current Chief of the MI6, Richard Moore, also has history of working in Turkey — he was performing tasks for the British intelligence there in the late 1980s and the early 1990s. Moore is fluent in Turkish and he also served as the British Ambassador to Turkey from 2014 to 2017.

The intelligence chiefs of the two most powerful countries in the Anglosphere are turkologists with connections in Turkey and Azerbaijan. It would be reasonable to assume that a regional conflict of such magnitude happening now, on their watch, is far from being a mere coincidence.

Before President Trump stopped the program the CIA had used the Azerbaijani Silk Way Airlines in more than 350 flights to bring weapons from Bulgaria to Turkey to then hand them to 'Syrian rebels'. Baku, the capital of Azerbaijan, is not only a CIA station but also a Mossad center for waging its silent war against Iran.

The former Indian ambassador to Turkey M.K. Bhadrakumar has written two interesting pieces on the current conflict. In the first one he reminds us on the 2018 color revolution in Armenia which he had thought meant trouble for Moscow.

I have never perceived it that way. While Armenia's current Prime Minister Nikol Pashinyan tried to get into business with 'western' powers and NATO there was no way he could fundamentally change Armenia's foreign policy. A hundred years ago Turkey, with the second biggest NATO army, had genocided Armenians. They have never forgotten that. The relation to Azerbaijan were also certain to continue to be hostile. That will only change if the two countries again come under some larger empire. Armenia depends on Russian arms support just as much as Azerbaijan does. (Azerbaijan has more money and pays more for its Russian weapons which allows Russia to subsidize the ones it sells to Armenia.)

After Nikol Pashinyan was installed and tried to turn 'west' Russia did the same as it did in Belarus when President Lukashenko started to make deals with the 'west'. It sat back and waited until the 'west' betrayed its new partners. That happened in Belarus a few weeks ago. The U.S. launched a color revolution against Lukashenko and he had nowhere to turn to but to Russia. Now Armenia is under attack by NATO supported forces and can not hope for help from anywhere but Russia.

Iran likewise did not fear the new government in Yerevan. It was concerned over Pashinyan’s recent diplomatic exchanges with Israel which were at the initiative of the White House. But that concern has now been lifted. To protest against Israel's recent sale of weapon to Azerbaijan Armenia has called back its ambassador from Israel just two weeks after it opened its embassy there.

Pashinyan will have to apologize in Moscow before Russia will come to his help. As Maxim Suchkov relays:

This is interesting: Evgeniy "Putin's chef" Prigozhin gives short interview to state his "personal opinion" on Nagorno-Karabakh. Some takeaways:

- Karabakh is Azerbaijan's territory
- Russia has no legal grounds to conduct military activity in Karabakh
- there are more American NGOs in Armenia than national military units
- PM Pashinyan is to blame
- until 2018 Russia was able to ensure ARM & AZ discuss conflict at the negotiation table, then US brought Pashinyan to power in Yerevan and he feels he's a king & can't talk to Aliyev

I wonder if Prigozhin's remarks suggest he'd be reluctant to deploy his Wagner guys to Armenia, if needed or if he is asked to do so, or he's just indeed stating his own views or it's a way to delicately allude to Pashinyan that Moscow not happy with him ... ?

Russia's (and Iran's) interest is to refreeze the conflict over Nagorno-Karabakh. But that requires compliant people on both sides. It therefore does not mind that Azerbaijan currently creates some pressure on Pashinyan. But it can not allow Azerbaijan to make a significant victory. One of its main concern will be to get Turkey out of the game and that will require support for Armenia. Iran has a quite similar strategy. The U.S. will probably try to escalate the situation and to make it more complicated for Russia. It seems to silently tell Turkey to increase its involvement in the war.

Russia will likely only intervene if either side makes some significant territorial gains. Unless that happens it will may well allow the war to continue in the hope that it will burn out:

The upcoming winter conditions, coupled with the harsh terrain, will limit large-scale military operations. Also, the crippled economies of both Azerbaijan and Armenia will not allow them to maintain a prolonged conventional military confrontation.