Many major powers around the world and in the Middle East denounced the assassination of Mohsen Fakhrizadeh, a leading Iranian nuclear scientist on November 27. Five of the six world powers that brokered the 2015 nuclear deal – Britain, China, France, Germany and Russia – rebuked the murder and urged an immediate de-escalation of tensions to avoid a regional conflict. The United States, the sixth and most important negotiator, had no comment; Trump pulled out of the deal in 2015. On December 1, Secretary of State Mike Pompeo said that “Israel is a key partner, and not a problem” when it comes to countering Iran. But he did not elaborate. A senior U.S. administration official told CNN that Israel was behind the assassination. 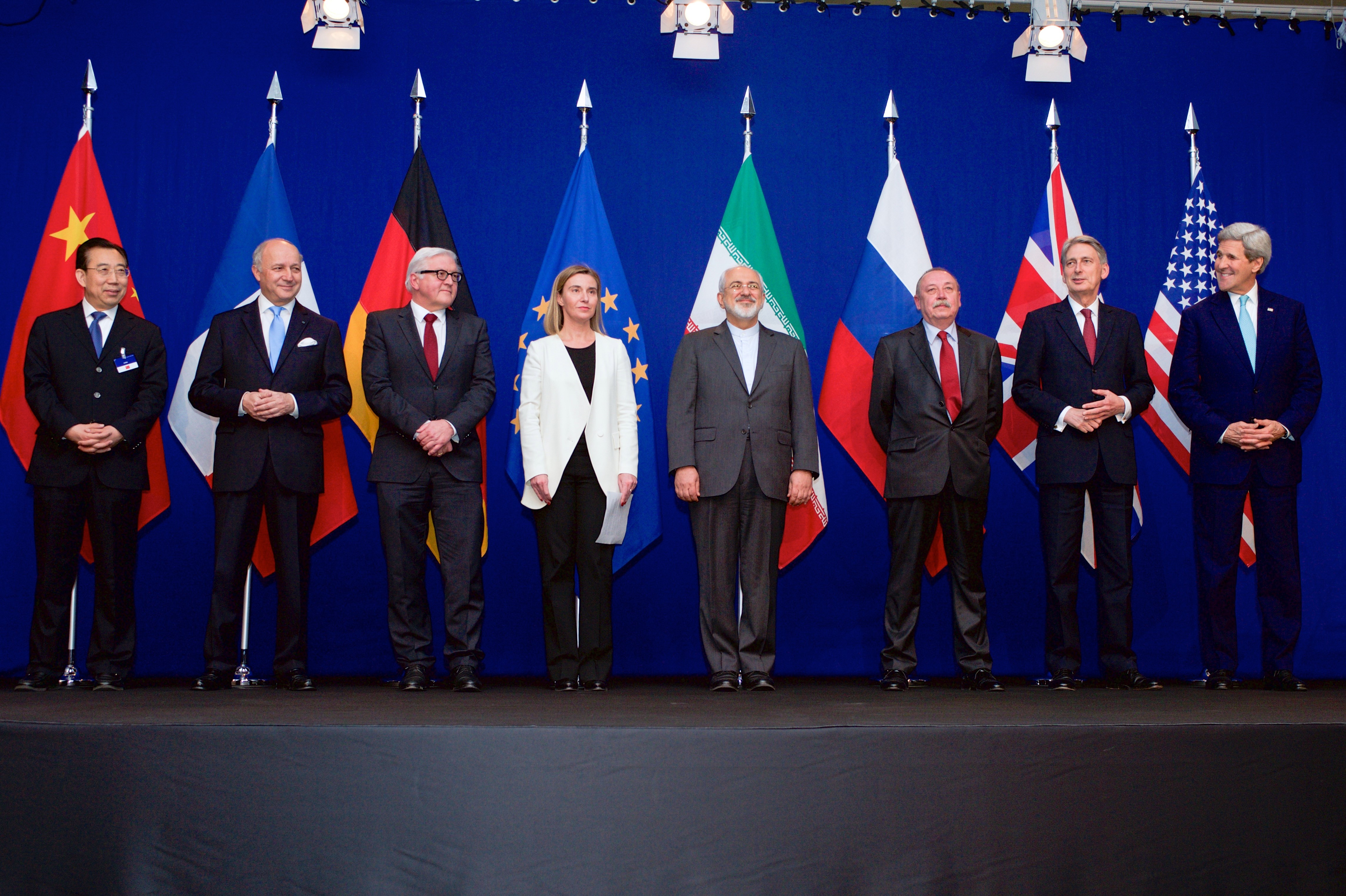 The original participants of the 2015 nuclear deal (left to right): China, France, Germany, the European Union, Iran, Russia, Britain and the United States

Europe: The European Union labeled the killing a “criminal act” that violated respect for human rights. Britain, France and Germany – urged restraint from all parties to preserve the agreement. “Weeks before a new government takes office in the United States, existing dialogue with Iran must be maintained in order to resolve through negotiation the conflict over Iran's nuclear program,” a Germany foreign ministry spokesperson told AFP. But European powers also condemned Iran's decision to further breach the nuclear agreement in response to the assassination.

Russia and China: China called the assassination a “violent crime,” while Russia called it a “terrorist act” and demanded that the perpetrators “be held accountable.” Moscow, Iran’s closest ally among the major powers, urged Tehran to avoid any response -- such as expelling U.N. nuclear inspectors -- that would jeopardize the nuclear agreement. “Such reaction is understandable, but emotions aren’t always helpful,” Mikhail Ulyanov, the Russian ambassador to International Organizations in Vienna, tweeted on November 29. On December 1, Iranian lawmakers passed a bill demanding that the government suspend U.N. inspections of nuclear facilities. The measure signaled a hardening stance within the parliament toward negotiations with the West.

Middle East: Several of Iran’s neighbors – Bahrain, Iraq, Qatar, Turkey and the United Arab Emirates – also condemned the murder. Saudi Arabia's U.N. ambassador said that the kingdom did not "accept terror acts." Riyadh denied Iranian accusations that it had been involved in the killing. "It is not the policy of Saudi Arabia to engage in assassinations; unlike Iran, which has done so since the Khomeini Revolution in 1979," Saudi Foreign Minister Adel Aljubeir tweeted.

More in this series:

The following are global reactions to Fakhrizadeh’s assassination.

"We're still waiting to see the full facts of what's happened in Iran, but I would say that we stick to the rule of international humanitarian law, which is very clear against targeting civilians.

"I will be meeting with my colleagues, also with Iran if they are willing to come into the tent, to make sure we hold them to account but also to try and find a peaceful path through."

"We have taken note with concern of the attack which claimed the life of Mohsen Fakhrizadeh. In a context of regional tensions, we are closely monitoring its repercussions in Iran and the region.

"We are calling for restraint in order to keep the channels of dialogue and negotiation open. In this context, we reiterate our calls for efforts to avoid an escalation of tensions."

Remarks by a Foreign Ministry spokesperson to AFP on November 28

"We call on all parties to avoid taking any action which could lead to a new escalation of the situation [which] we absolutely do not need at this moment.

"Weeks before a new government takes office in the United States, existing dialogue with Iran must be maintained in order to resolve through negotiation the conflict over Iran's nuclear program."

Foreign Minister Heiko Maas in an interview on December 4

DER SPIEGEL: "The question is whether you consider such an attack to be a legitimate instrument."

Maas: "No. In abstract terms, there may be situations where international law may allow for preventing persons from carrying out a specific action - to prevent imminent crimes such as attacks, for example. But the risk of this making the situation even more dangerous is obvious."

"We, the governments of France, Germany and the United Kingdom have worked tirelessly to preserve the Joint Comprehensive Plan of Action (JCPoA). It is a key achievement of multilateral diplomacy and the global non-proliferation architecture. We negotiated the JCPoA with the conviction that it would decisively contribute to building confidence in the exclusively peaceful nature of Iran’s nuclear programme, as well as to international peace and security. It remains the best, and currently the only, way to monitor and constrain Iran’s nuclear programme.

"Iran’s recent announcement to the IAEA that it intends to install an additional three cascades of advanced centrifuges at the Fuel Enrichment Plant in Natanz is contrary to the JCPoA and deeply worrying.

"Furthermore, we have taken note, with great concern, of the recent law passed by the Iranian Parliament, which – if implemented – would substantially expand Iran’s nuclear programme and limit IAEA monitoring access. The measures would be incompatible with the JCPoA and Iran’s wider nuclear commitments.

"If Iran is serious about preserving a space for diplomacy, it must not implement these steps. Such a move would jeopardise our shared efforts to preserve the JCPoA and risks compromising the important opportunity for a return to diplomacy with the incoming US Administration. A return to the JCPoA would also be beneficial for Iran.

"We will address Iran’s non-compliance within the framework of the JCPoA. We welcome the statements by President-elect Biden on the JCPoA and a diplomatic path to address wider concerns with Iran. This is in all our interests."

Statement by the European External Action Service on November 28

"On 27 November 2020 in Absard, Iran, an Iranian government official and, according to reports, 1 of his bodyguards, were killed in a series of violent attacks. This is a criminal act and runs counter to the principle of respect for human rights the EU stands for.

"The High Representative expresses his condolences to the family members of the individuals who were killed, while wishing a prompt recovery to any other individuals who may have been injured.

"In these uncertain times, it is more important than ever for all parties to remain calm and exercise maximum restraint in order to avoid escalation which cannot be in anyone’s interest."

Remarks by a Foreign Ministry spokesperson to Reuters on November 28

"A few weeks before the new U.S. administration takes office, it is important to preserve the scope for talks with Iran so that the dispute over Iran’s nuclear program can be resolved through negotiations… We therefore urge all parties to refrain from any steps that could lead to a further escalation of the situation."

Statement by the Ministry of Foreign Affairs on November 30

"We strongly condemn the assassination of Iranian scientist Mohsen Fakhrizadeh on November 27, 2020. We are seriously worried by the provocative nature of this terrorist attack, which was obviously designed to destabilize the region and exacerbate its conflict potential. Those who organized the assassination to further their political interests must be held accountable.

"Stability and security have always been Russia’s priorities in the Middle East and the Persian Gulf. This is the goal of its efforts and initiatives undertaken within the framework of the UN, at other international venues and in bilateral relations with regional countries. We call on all sides to refrain from moves that could escalate tensions."

"China is shocked by the killing of the Iranian scientist and condemns this violent crime. We hope that the incident will be thoroughly investigated. China opposes any act that aggravates regional tensions and undermines regional peace and stability. As the current situation in the region is highly complex and sensitive, all parties should work together to ease regional tensions and maintain regional peace and stability."

Statement by Foreign Ministry on November 30

"The Ministry of Foreign Affairs of the Kingdom of Bahrain condemned the assassination of Mr. Mohsen Fakhrizadeh in Tehran.

"The Ministry of Foreign Affairs Statement stressed ‘the need for concerted efforts to reduce tension, prevent escalation in the region and ensure stability and security.’

"The Ministry added that in light of the current situation in the region, the Kingdom of Bahrain calls on all parties to exercise maximum restraint to avoid new levels of instability in the region and threaten peace."

Readout of phone call with Javad Zarif on November 30.

"Foreign Minister Mr. Fuad Hussein made a phone call with his counterpart, Foreign Minister of the Islamic Republic of Iran, Mr. Muhammad Javad Zarif, expressing his sincere condolences following the assassination of the Iranian scientist Mr. Mohsen Fakhrizadeh, expressing condemnation of these actions that do not contribute to supporting stability."

Readout of phone call with Javad Zarif on November 28.

"H.E the Deputy Prime Minister and Minister of Foreign Affairs expressed during the call the State of Qatar’s  strong condemnation of the bombing that took place in Tehran and the assassination of the scientist, Mohsen Fakhrizadeh, head of the Research and Innovation Organization at the Iranian Ministry of Defense, in an armed attack, considering it a clear violation of human rights.

"H.E expressed the State of Qatar's condolences to the government and people of the Islamic Republic of Iran, stressing that such steps will only contribute to pouring more fuel to the fire at a time when the region and the international community are looking for ways to reduce tensions and return to the table of dialogue and diplomacy.

"H.E the Deputy Prime Minister and Minister of Foreign Affairs called for restraint and finding fundamental solutions for the outstanding issues."

Statement by Foreign Ministry on November 28

"We are saddened by the killing of Mohsen Fakhrizadeh as a result of an armed attack on 27 November in Tehran. We condemn this heinous murder and extend our condolences to the government of the Islamic Republic of Iran and the family of the deceased.

"Turkey is against all attempts aiming at undermining peace and tranquility in the region as well as terrorism in all its forms regardless of its perpetrator or target.

"In this vein, we hope that the perpetrators of the attack will be identified and held accountable before justice. We also call on all parties to act in common sense and restraint and refrain from attempts that could lead to escalation in the region."

Statement by Foreign Ministry on November 30

"The UAE Ministry of Foreign Affairs and International Cooperation has stressed that the state of instability our region is currently going through, and the security challenges it faces, drive us all to work towards averting acts that could lead to escalation and eventually threaten the stability of the entire region.

"In a statement released today, the Ministry said that emanating from its deep conviction on the need to pursue all means for stability in the region, it condemns the heinous assassination of Mohsen Fakhrizadeh, which could further fuel conflict in the region.

"‘Given the current situation in the region, the UAE calls upon all parties to exercise maximum degrees of self restraint to avoid dragging the region into new levels of instability and threat to peace,’ the Ministry added."

Statement by Secretary General spokesperson to AP on November 28

"We condemn any assassination or extra-judicial killing…We urge restraint and the need to avoid any actions that could lead to an escalation of tensions in the region."