Iran vowed retaliation for the killing of a prominent nuclear scientist, Mohsen Fakhrizadeh, who was shot to death near Tehran on November 27. Senior national security officials blamed Israel and Iranian opposition groups for orchestrating the alleged assassination. They labelled the killing as state-sponsored terrorism and demanded that the international community condemn the perpetrators. 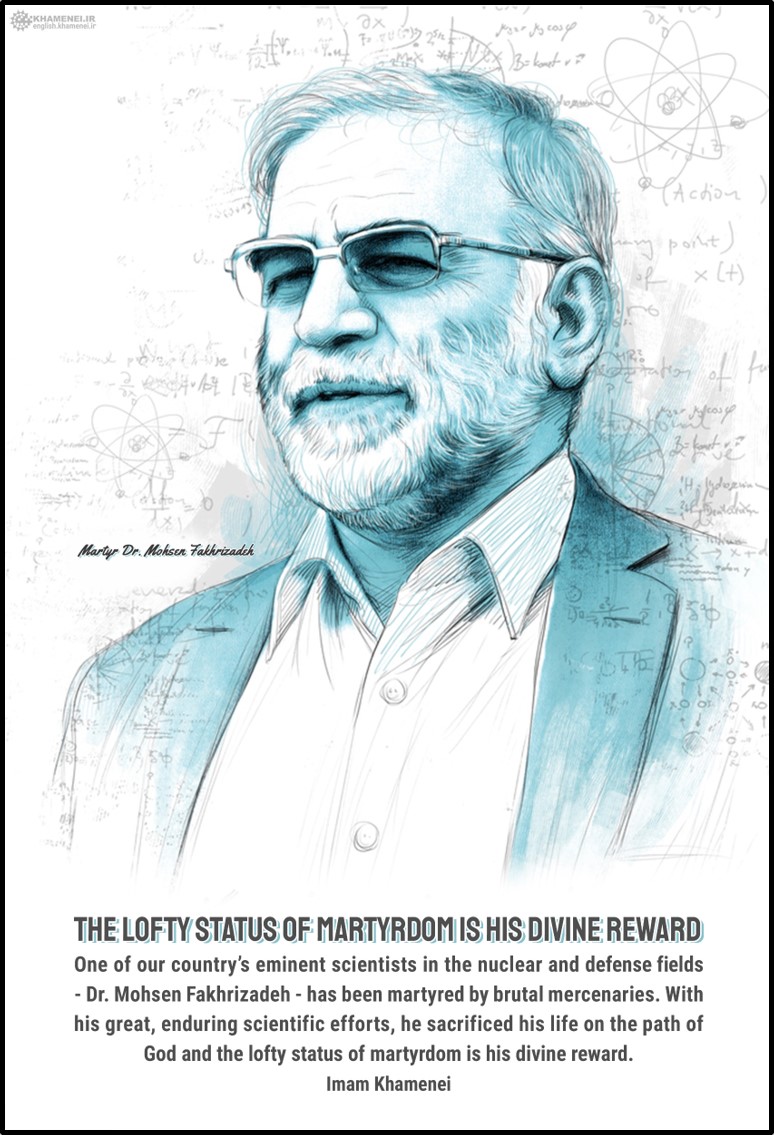 Supreme Leader Ali Khamenei promised “definitive punishment” for the killers after an investigation was complete. “One of our country’s eminent scientists in the nuclear and defense fields… has been martyred by brutal mercenaries,” he said on November 28. Khamenei pledged that the Islamic Republic would continue its research into nuclear technologies to honor the scientist’s legacy.

Ali Shamkhani, the secretary of Iran’s chief national security body, accused Israel and the Mujahadeen-e Khalq (MEK), a leftist opposition group in exile, of plotting the assassination together. “The [MEK] have been involved for sure, and the criminal element in this job is definitely the Zionist regime and Mossad,” Shamkhani told reporters at Fakhrizadeh’s funeral. He claimed that Israel had used “electronic devices” to carry out the attack but did not provide evidence.

Tehran sought to avoid a military response from the Trump administration during its final months in office. It also did not want to sabotage future negotiations with the incoming Biden administration over sanctions relief. President Hassan Rouhani said that Iran would respond “in a timely manner,” which suggested a more calibrated response. Ali Rabiei, the official government spokesperson, echoed Rouhani’s remarks. “[The Islamic Republic] shouldn't fall into the trap of linking the assassination to past nuclear negotiations,” he said.

But the government faced domestic pressure to retaliate immediately. Protesters outside Rouhani’s house chanted “no submission, no concessions with America, only war!” One hardline newspaper called for a strike on the Israeli port city of Haifa to inflict “heavy human casualties.” On December 1, Iran’s conservative-dominated parliament passed a bill demanding that the government immediately resume enriching uranium to 20 percent, a step that could bring Tehran closer to attaining fuel for a bomb. Weapons-grade uranium is enriched to 90 percent or above. The bill also called for barring U.N. nuclear inspectors, if sanctions on Iran's banking and oil sectors were not lifted within a month. “Death to America! Death to Israel!” lawmakers chanted after the measure was passed.

Rouhani said that he opposed the bill because it could harm diplomatic efforts to lift U.S. sanctions on Iran. “The government does not agree with that resolution and considers it detrimental to the process of diplomatic activities,” he said. But the Guardian Council - a panel of 12 Islamic jurists and scholars that approves or vetoes all laws by the parliament – passed a modified version of the law. The Council extended the deadline to lift oil and banking sanctions from one to two months. The resolution demanded that the government begin enriching uranium up to 20 percent immediately. On December 3, Iran told the IAEA it would quadruple the number of advanced centrifuges at the underground Natanz facility which would allow it to enrich uranium faster.

The following are statements by Iranian national security officials.

Message of condolence on November 28

“One of our country’s eminent scientists in the nuclear and defense fields - Dr. Mohsen Fakhrizadeh - has been martyred by brutal mercenaries. With his great, enduring scientific efforts, he sacrificed his life on the path of God and the lofty status of martyrdom is his divine reward.

“All relevant administrators must seriously place two crucial matters on their agendas: First to investigate this crime and firmly prosecute its perpetrators and its commanders, second to continue the martyr’s scientific and technological efforts in all the sectors where he was active.

“I offer my condolences for this loss and my congratulations on his martyrdom to his respected family, the scientific community of the country as well as his colleagues and students in various sectors, and I ask God to elevate his rank.”

“Some say through dialogue and negotiations actions can be taken in order to put an end to such hostility... This is not possible, because our enemies oppose the nature of the Islamic Republic establishment...They will never put an end to their hostilities toward us."

Message of condolence on November 28

"Undoubtedly, this desperate terrorist act is the result of the inability of the sworn enemies of the Iranian nation against the scientific progress and the honors and capabilities of the great Iranian nation following their subsequent defeats in the region and other political stages around the world that revived the depth of their malice and hatred, like their other inhuman acts, in the minds of all people around the world.

Meeting of the Coronavirus Task Force on November 28

"The dear people of our country, and the world witnessed a terrorist act by anti-Iranians against an Iranian researcher and scientist, who had spent most of his time in the recent months researching and making kits for fighting coronavirus.

"This brutal assassination shows that our enemies are spending these weeks anxiously, weeks when they feel their pressure is easing and the world situation is changing.

"It is important for them to make the most of these few weeks so that they can both create uncertain conditions in the region and drive the global attention from other issues and problems through the terror and intimidation that they have created in the occupied territories these days.

"All think tanks and all enemies of Iran should know that the Iranian nation and officials are more courageous and brave than to leave this criminal act unanswered and the relevant officials will respond to this crime in a timely manner.

"Those who are thinking of creating a riot should know that we know what they are up to and they will not succeed in achieving their evil goals.

"Both the Zionist Regime and those who are against Iran should know that the path of development and research of the country will continue rapidly, and with the loss of our beloved Fakhrizadeh, a lot of other Fakhrizadehs will work hard to make up for his absence.”

"The government does not agree with that resolution and considers it detrimental to the process of diplomatic activities."

“These cowardly assassinations are a flagrant breach of international law, moral principles and humanity. It falls upon the international community to confront such acts. Iran is at the forefront of the war on terrorism in order to maintain peace and stability in the region and in the world. We call on the world community to denounce terrorism and build a consensus against tensions and adventurism in the region.”

“Terrorists assassinated an eminent Iranian scientist. Such a cowardly act which has serious signs of Israel’s involvement indicates the bellicosity of its perpetrators out of desperation. Iran calls on the international community, especially the European states, to abandon their double standards and denounce the act of state-terrorism.”

“The Iranian nation reserves the right to give a crushing response based on a specific strategy to ensure national interests and dignity.

"Iran's scientific and defense policies won't change because of the assassination of one scientist or general.

"[The Islamic Republic] shouldn't fall into the trap of linking the assassination to past nuclear negotiations.”

“I offer my condolences to the Iranian nation, scientific community, and [Dr. Fakhrizadeh's] family for the martyrdom of Dr. #Mohsen_Fakhri_Zadeh, our country's leading scientist. The aggressor will certainly be punished, but not on the playing field that he defines.”

“Terrorist enemies are pursuing several goals through the events of the past month:

4 - Disrupting the global security environment due to likely future changes in international policies.

“The right remains for the #Iranian_nation to give a decisive response based on national interests and honor, which will determine its dimensions, time and place.”

“The main losers of this scenario were the Israeli regime or some regional rulers, who went into action in a bid to block the path of righteousness and any opportunity where the Iranian nation could reclaim its rights.

“The assassination of general Qassem Soleimani and Mohsen Fakhrizadeh, who fell victim to state terrorism, is clear evidence of the weakness and embarrassment of the enemies that are losers and want to simply slow down Iran’s move on the path to development and power with the help of assassins through explosion and terror.”

Letter to the U.N. Secretary-General and Security Council on November 27

"I am writing to inform you that today, 27 November 2020 in Absard city of Tehran province, Mr. Mohsen Fakhrizadeh, a prominent Iranian scientist, was assassinated in a terrorist attack. One of the latest services of Martyr Fakhrizadeh was his outstanding role in the development of the first indigenous COVID-19 Test Kit, which is a great contribution to our national efforts in curbing the COVID-19 pandemic at a time when Iran is under inhumane sanctions of the United States, strictly preventing our access to humanitarian goods including medicines and medical equipment. He was also supervising the development of a COVID-19 vaccine.

"Over the current decade, several top Iranian scientists have been targeted and assassinated in terrorist attacks and our firm evidence clearly indicates that certain foreign quarters have been behind such assassinations. The cowardly assassination of Martyr Fakhrizadeh -- with serious indications of Israeli responsibility in it – is another desperate attempt to wreak havoc on our region as well as to disrupt Iran’s scientific and technological development. While during the past forty years, no amount of pressure and terrorist attacks were able to prevent us from achieving science and technology needed for our socio-economic development.

"Warning against any adventuristic measures by the United States and Israel against my country, particularly during the remaining period of the current administration of the United States in office, the Islamic Republic of Iran reserves its rights to take all necessary measures to defend its people and secure its interests.

"The Islamic Republic of Iran condemns, in the strongest possible terms, the criminal assassination of Martyr Fakhrizadeh, and expects the Secretary-General of the United Nations and the Security Council to strongly condemn this inhumane terrorist act and take necessary measures against its perpetrators."

Statement to reporters at Fakhrizadeh’s funeral on November 30

“Unfortunately, the operation was a very complicated operation and was carried out by using electronic devices. No individual was present at the site.”

“It has become clear to us who has masterminded this and what its background is. The Munafeqin [Mujahedin-e Khalq Organization] have been involved for sure, and the criminal element in this job is definitely the Zionist regime and Mossad.”

Statement at Fakhrizadeh’s funeral on November 30

“We will definitely track down the criminals until the end. They should know they will be punished for what they did. We will execute the order issued by the chief-commander of Iranian armed forces.”

“You think you’re closing a path or breaking a determination through this move; but you should know that will not happen.

“These countries [that didn’t condemn the attack] must know that appeasing terrorists emboldens them. If you fail to take a firm stance and remain trapped in your double views, terrorism will one day haunt you.”

Statement at Fakhrizadeh’s funeral on November 30

“Our enemies committed suicide for fear of death, and they should know that they will certainly pay the price.”

Andrew Hanna, a Program Specialist at the United States Institute of Peace, assembled this report.