On November 27, Mohsen Fakhrizadeh, a prominent nuclear scientist, was assassinated in a roadside attack about 40 miles east of Tehran. Western and Israeli intelligence had long suspected that Fakhrizadeh was the father of Iran’s covert nuclear weapons program. He was often compared to J. Robert Oppenheimer, the father of the American atomic bomb. He kept a low profile for most of his career. His name was not widely known even in Iran until he was sanctioned by the United Nations in 2007 and the United States in 2008.

The program he headed was formally halted in 2003 in a deal with three major European powers. Tehran has not restarted that aspect of its nuclear program, U.S. intelligence confirmed as recently as 2019. Fakhrizadeh, who had held the rank of brigadier general in the Revolutionary Guards, was moved to head the Defense Ministry’s Organization of Defensive Innovation and Research.

On December 1, Iran posthumously released photographs of Fakhrizadeh receiving an award from President Hassan Rouhani for his role in helping navigate the 2015 nuclear deal. For security reasons, the medal was bestowed in a separate room and without an audience at the same time other members of the negotiating team were honored on February 8, 2016. Fakhrizadeh was pictured with other members of the team, including Ali Akbar Salehi, the head of the Atomic Energy Organization of Iran, and Deputy Foreign Minister Majid Takht Ravanchi. Defense Minister Hossein Dehghan and President Rouhani’s chief of staff, Mohammad Nahavandian, were also present.

But Israel continued to focus on Fakhrizadeh. Prime Minister Benjamin Netanyahu featured the scientist’s photo in a slideshow presentation on Iran’s nuclear program in April 2018. “Remember that name, Fakhrizadeh.”

Despite Fakhrizadeh’s past role, the death of one individual will not significantly impact Iran’s nuclear program, according to security and nuclear experts. “Whatever role Mr. Fakhrizadeh has played in the Iranian nuclear program, his assassination will have no material effect on Iran’s capability to amass more enriched uranium, nor will it erase the nuclear weapons-related knowledge its nuclear establishment has acquired, “ said Daryl Kimball, executive director of the Arms Control Association. “He was certainly a key figure in pre-2004 Iranian nuclear weapon-related research and design efforts, but he does not seem to have played a decisive role in the rapid advances in Iran’s uranium enrichment program that occurred after 2006 and before the implementation of the negotiated limits on Iran’s program, which began in 2014.”

Details on the attack that killed him varied. Iran’s defense ministry initially reported that several gunmen opened fire on Fakhrizadeh’s car, but Ali Shamkhani, the secretary of the Supreme National Security Council, later said that that “electronic equipment” triggered by remote control killed the scientist.

Fakhrizadeh’s body was taken to the Shiite holy cities of Mashhad on November 28 and Qom on November 29 for funeral ceremonies. On November 30, Fakhrizadeh was buried in a cemetery in Tehran. Defense Minister General Amir Hatami pledged revenge in a speech at the funeral. “The enemies know, and I as a soldier tell them, that no crime, no terror and no stupid act will go unanswered by the Iranian people,” he said.

Iran blamed the killing on Israel. Foreign Minister Javad Zarif condemned the killing as terrorism. “This cowardice—with serious indications of Israeli role—shows desperate warmongering of perpetrators,” he tweeted. On November 30, Israeli Intelligence Minister Eli Cohen told local radio that he did not know who was behind the raid. Historically, Israel has not claimed responsibility for assassinations. Iran has also blamed Israel for the killing of four other nuclear scientists between 2010 and 2012.

Supreme Leader Ayatollah Ali Khamenei ruled out new diplomacy with the United States in a statement read by his representative at the scientist’s funeral. “Some say through dialogue and negotiations actions can be taken in order to put an end to such hostility,” he said. “This is not possible, because our enemies oppose the nature of the Islamic Republic establishment. . . . They will never put an end to their hostilities toward us.”

On November 29, all members of Parliament, which is dominated hardliners, signed a statement calling on the government to terminate U.N. inspections of its nuclear facilities. Lawmakers also considered a bill to end the inspections, significantly ramp up uranium enrichment and build a new heavy water reactor.

The United Nations urged “restraint” from all parties to avoid further escalation. “We condemn any assassination or extra-judicial killing," a spokesman for the U.N. Secretary General said. European and Islamic countries condemned the alleged assassination. The European Union labelled the killing a “a criminal act” that “runs counter to the principle of respect for human rights.” Azerbaijan, Bahrain, Iraq, Oman, Pakistan, Qatar, Syria, Turkey, and the United Arab Emirates also condemned the killing.

More in this series: 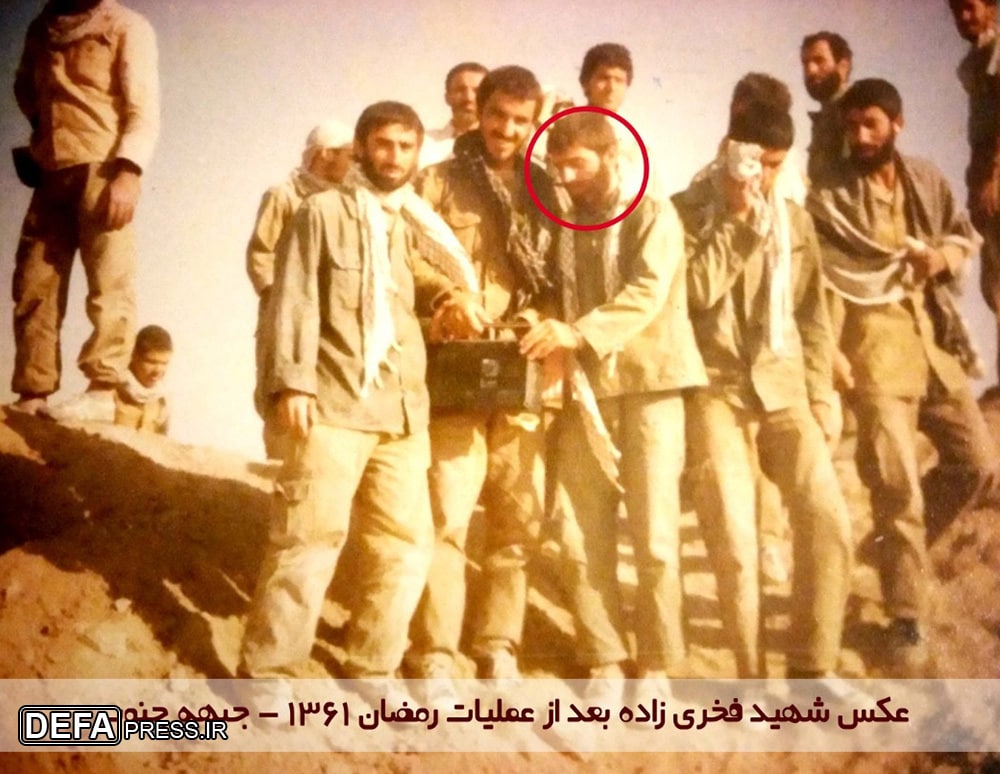 Fakhrizadeh in 1982 during the war with Iraq

Mohsen Fakhrizadeh Mahabadi was born in 1957 or 1958 in the holy city of Qom. He was married and had three sons. He joined the Islamic Revolutionary Guard Corps (IRGC) after the 1979 revolution and fought during the 1980-1988 war with Iraq. He eventually attained the rank of brigadier general.

Fakhrizadeh received a bachelor’s in nuclear physics from Shahid Beheshti University in 1987 and later a graduate degree from the University of Isfahan in nuclear radiation and cosmic rays. He later headed the military-linked Physics Research Center, where he reportedly worked on plans and acquiring parts for Iran’s first uranium enrichment facility.

In the early 2000s, Fakhrizadeh was the executive officer of so-called AMAD Plan, which undertook activities “in support of possible military dimensions” of Iran’s nuclear program, according to the U.N. nuclear watchdog, the International Atomic Energy Agency (IAEA). In 2007, a U.S. National Intelligence Estimate on Iran's nuclear activities said that there was evidence that Tehran halted its nuclear weapons program in 2003. For years, the IAEA sought access to Fakhrizadeh to question him, but Tehran refused. It claimed he was an academic at Imam Hussein University. U.S. intelligence assessed that the position was a cover story.

In 2007, the U.N. Security Council sanctioned Fakhrizadeh and seven other Iranians for involvement in nuclear and/or ballistic missile activities. Security Council Resolution 1747 described as a senior Ministry of Defense and Armed Forces Logistics (MODAFL) scientist. The United States sanctioned him in 2008 for “activities and transactions that contributed to the development of Iran's nuclear program.” 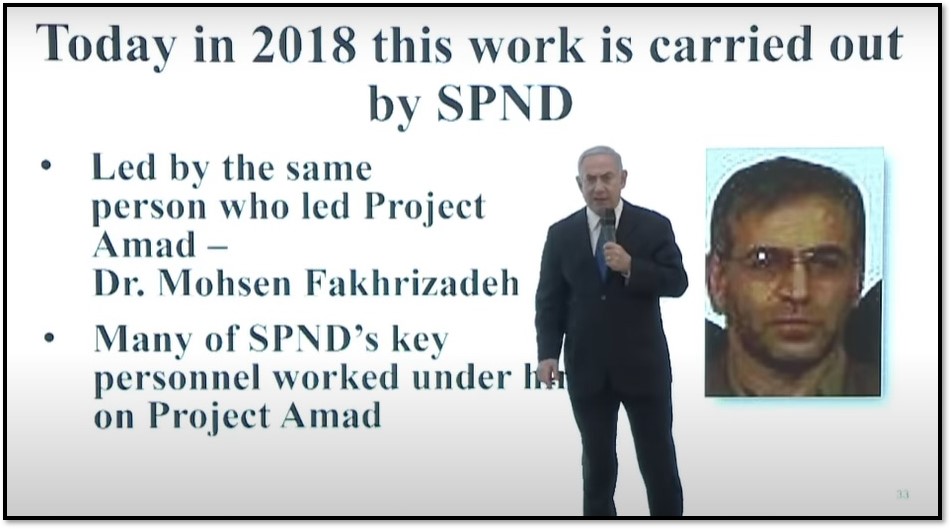 In April 2018, Prime Minister Benjamin Netanyahu alleged that Fakhrizadeh played a leading role in clandestine nuclear weapons work. In a televised presentation on Iran’s secret nuclear archive retrieved by Israeli operatives, he claimed that Fakhrizadeh had not stopped his research in 2003. Instead, he had continued his work with many of the same personnel at the Organization of Defensive Innovation and Research, known by its Persian acronym SPND.

The organization has been under U.S. sanctions since 2014 for its work on weapons of mass destruction. In June 2020, the State Department also alleged that former scientists continued their work on “weaponization-relevant dual-use technical activities” under Fakhrizadeh’s leadership. “If Iran were to make a fateful gamble to produce nuclear weapons, he would have led the effort,” Mark Fitzpatrick, an associate fellow at the International Institute for Strategic Studies.