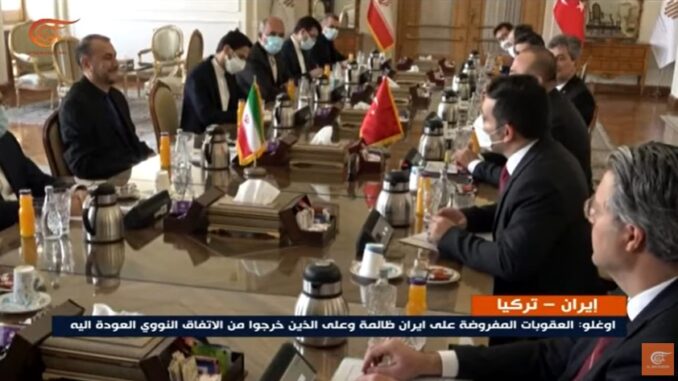 A translation of a news report on the Turkish foreign minister’s recent visit to Tehran, during which plans for a joint comprehensive strategic cooperation agreement between Iran and Turkey was discussed.

Ibrahim Raisi called on regional states to find solutions for their own problems without foreign interferences. He also stressed on the importance of boosting regional cooperation between Tehran and Ankara to (eventually) encompass the international level. (Raisi) pointed out that these (developed) ties will influence global equations as Iran and Turkey occupy an important position internationally and regionally.

Meanwhile, the Iranian foreign minister revealed a joint plan between the two states with the aim of reaching a long-term (cooperation) roadmap.

We have agreed on holding diplomatic talks to reach a long-term roadmap for (our) bilateral ties. And we hope to sign this (roadmap) document in the upcoming visit of the President of Turkey, Recep Tayyip Erdogan, to Tehran.

This (roadmap) document is similar to strategic agreements which Iran plans for with China, Russia and Venezuela. The future nuclear negotiations may be successful, or may not be, despite the optimism of the Turkish guest.

The sanctions imposed on Iran are unjust; moreover, those sides who pulled out of the (Iran) nuclear deal should rejoin it. We are pleased with the resumption of the nuclear negotiations in Vienna and we hope (these talks) will reach positive results.

‘A positive result will never be achieved without the US taking a serious political decision to lift (US) sanctions (off Iran), and vowing not to reimpose them again’, Iranian decision-makers say.

Politically, Ankara has for years stood by Tehran’s side during the nuclear crisis, however, practically, Ankara adheres to US sanctions. Therefore, the revival of the nuclear deal and the drafting of a comprehensive roadmap for (cooperation) between the two countries will help to bring economic cooperation back to its former state or perhaps beyond that.