Iran and Israel’s Undeclared War at Sea (Part 2): The Potential for Military Escalation

Iran and Israel’s Undeclared War at Sea (Part 2): The Potential for Military Escalation

Although both sides have sought to keep their tit-for-tat maritime attacks under control, they pose a substantial risk of miscalculation and escalation that could jeopardize international shipping.

On April 13, explosions rocked the Israeli-owned car-carrier ship Hyperion Ray near Fujairah. A week earlier, explosions badly damaged the Saviz, a converted cargo ship that Iran permanently moored in the Red Sea to serve as a suspected intelligence collection outpost and floating armory. Together, the two attacks appear to be the latest ripostes in Iran and Israel’s long-running, low-intensity shadow war.

The maritime front of this undeclared conflict has intensified since 2019 due in large part to an increase in Iran’s illicit oil smuggling efforts, which are aimed at funding Lebanese Hezbollah, facilitating the foreign operations of the Islamic Revolutionary Guard Corps-Qods Force (IRGC-QF), and propping up Syria’s Assad regime (see Part 1 of this PolicyWatch for a fuller discussion of these smuggling networks). Of course, Iran had used ships to send weapons and ammunition to groups like Hezbollah, Hamas, and Palestinian Islamic Jihad long before 2019, with Israel seizing at least four of them between 2002 and 2014. Yet Tehran’s desire to cement its military presence in Syria and its supply lines to Hezbollah led to more systematic illegal shipments of oil products, supplies, and, at times, arms. In response, Israel began a more concerted naval disruption campaign with apparent support from Western allies and, perhaps, Arab Gulf states.

Israel has never publicly accepted responsibility for these attacks against Iranian ships bound for Syria, but media reports and unofficial disclosures have essentially confirmed its role, and Iran’s hand in recent attacks against Israeli ships is clear as well. Both sides seem keen to contain their attacks, but the situation could nonetheless escalate—especially now that de facto military vessels like the Saviz are apparently being targeted amid new attacks on other fronts (e.g., the April 10 sabotage operation against Iran’s Natanz nuclear facility).

In November 2019, Iran disclosed that three of its tankers (Happiness 1, Helm, and Sabiti) had been attacked off Saudi Arabia’s Red Sea coast within a period of six months, spurring Tehran to warn international shipping authorities that commercial routes in that waterway were no longer safe. Six additional Iranian vessels may have been targeted in 2020, according to a recent Wall Street Journal report. In all, the report noted, “Israel has targeted at least a dozen vessels bound for Syria,” most carrying Iranian oil and some carrying weapons and material for Hezbollah’s precision missile program. Similarly, the New York Times reported in March that the Israeli Navy’s Flotilla-13 commando unit had carried out at least ten such attacks using mines and other weaponry, primarily in the Red Sea but also in the East Mediterranean. Days later, the Israeli outlet Haaretz expanded on these reports, asserting that the “economic warfare” operation included several dozen attacks and had cost Iran billions of dollars.

The ships that are known to have been targeted sailed through the Red Sea, the Suez Canal, and the Mediterranean en route to the offshore oil terminals near Baniyas, Syria. After the spate of attacks, some Iranian ships began to take the much longer route circumnavigating Africa, causing supply disruptions and fuel rationing in Syria. 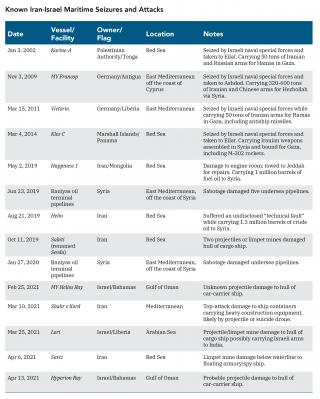 The tit-for-tat nature of the incidents has become more obvious in 2021. On February 25, two explosions blew holes in the Israeli-owned car-carrier MV Helios Ray as it transited the Gulf of Oman. The Israeli government blamed Iran for the incident and implied it would respond. On March 10, the Iranian container vessel Shahr e Kord was hit by an “explosive object” as it neared the Syrian port of Latakia, causing a fire onboard and destroying two containers carrying parts for Caterpillar heavy construction equipment. The apparent Iranian response came on March 25, when the Israeli container ship Lori was attacked while under way from Haifa to India in the middle of the Arabian Sea. Then came the April 6 strike on the Saviz, whose strategic location near Eritrea’s Dahlak Archipelago had long enabled it to support Yemen’s Houthi rebels in their fight against the Saudi-led coalition, among other suspected roles. The Hyperion Ray attack off the Emirati coast is the latest known incident.

Additional incidents seem related, many of them involving other countries, target types, or tactics:

In a seemingly calculated effort by both sides to avoid escalation, none of the targeted ships were significantly damaged (though explosions forced at least two vessels to return to Iran). Indeed, some of the attacks showed careful, pinpoint precision, such as the apparent targeted destruction of specific containers onboard the Shahr e Kord.

In May 2020, the U.S. government issued guidance to the maritime industry on how to address illicit shipping and sanctions evasion practices pursued by the IRGC, Hezbollah, and other actors. Within months, the combined effects of international pressure and Israeli military efforts had disrupted Iran’s illicit oil smuggling operations so much that the Russian Navy began escorting Iranian vessels in order to maintain supply lines to the Assad regime. In October, for example, the Iranian tanker Samah reportedly turned off its transponder after transiting the Suez Canal and enjoyed the protection of Russian vessels as it crossed the Mediterranean to Syria, according to a report issued that month by the U.S. Naval Institute.

Thus far, the maritime conflict between Iran and Israel has remained at a low-intensity gray-zone level below the threshold of declared hostilities, with both sides seeking to avoid escalation that might disrupt their respective shipping lanes and economies. Yet both countries have substantial special naval warfare capabilities and experience, so neither is likely to settle for anything less than maritime superiority. The pace of their attacks has already increased and can be expected to accelerate further, while also expanding to a larger geographical area and potentially employing additional systems and tactics (e.g., submarines; motherships used as staging posts; longer-range drones and fast-attack vessels).

The Saviz incident in particular showed the risk of escalation. By aiming below the waterline, the attack was seemingly designed to cripple or even sink the ship. And despite the vessel’s technical classification as a civilian cargo ship, the attack represented the first operation against a de facto military target, which might compel Iran to retaliate in kind against Israeli naval forces. Moreover, the incident occurred less than a hundred miles from the passing USS Eisenhower carrier group, and afterward, Iran made unsubstantiated claims that other countries may have been involved, pointing to the risk of Washington being dragged into a fight.

Ultimately, the extent of the damage to the Saviz might require substantial shoreside repairs and possible withdrawal to Iran. If so, Tehran may decide to maintain the station by deploying one of its new, more heavily armed floating sea bases such as the Shahid Roudaki (IRGC Navy) or Makran (Islamic Republic of Iran Navy, or IRIN). That would mean a substantial, formal Iranian military presence in the Red Sea—a scenario that Israel and other regional powers would find very hard to swallow.

Farzin Nadimi is an associate fellow with The Washington Institute, specializing in the security and defense affairs of Iran and the Gulf region.