By Jon Gambrell and Isabel Debre

DUBAI, United Arab Emirates (AP) — An explosion struck an Israeli-owned cargo ship sailing out of the Middle East on Friday, an unexplained blast renewing concerns about ship security amid escalating tensions between the US and Iran.

The crew and vessel were safe, according to the United Kingdom Maritime Trade Operations, which is run by the British navy. The explosion forced the vessel to head to the nearest port.

The site of the blast, the Gulf of Oman, saw a series of explosions in 2019 that the US Navy blamed on Iran against the backdrop of steeply rising threats between former US President Donald Trump and Iranian leaders. Tehran denied the accusations, which came after Trump abandoned Tehran’s 2015 nuclear deal with world powers and reimposed harsh sanctions on the country.

In recent weeks, as the administration of Joe Biden looks to re-engage with Iran, Tehran has escalated its breaches of the nuclear accord to create leverage over Washington. The deal saw Tehran agree to limit its enrichment of uranium in exchange for the lifting of crippling sanctions.

Iran also has blamed Israel for a recent series of attacks, including a mysterious explosion last summer that destroyed an advanced centrifuge assembly plant at its Natanz nuclear facility and the killing of Mohsen Fakhrizadeh, a top Iranian scientist who founded the Islamic Republic’s military nuclear program two decades ago.

Ray Shipping confirmed that one of its vessels carrying a “Bahamas flag” was damaged “when an explosion was heard in the Persian Gulf near the Straits of Hormuz.”

“The ship has 28 crew members. No one was hurt. The engine room was not damaged. It is on its way to the port of Dubai to fix everything necessary,” the company told the Times of Israel. 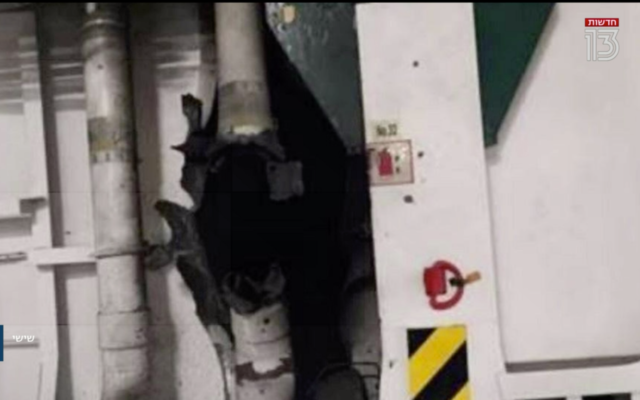 Damage is seen in the Israeli-owned ship that hit by an explosion in the Gulf of Oman on February 26, 2021. (Screen capture/Channel 13)

Satellite-tracking data from website MarineTraffic.com showed the Helios Ray had been nearly entering the Arabian Sea around 0600 GMT Friday before it suddenly turned around and began heading back toward the Strait of Hormuz. It still listed Singapore as its destination on its tracker.

Capt. Ranjith Raja of the data firm Refinitiv told the AP that the Israeli-owned vessel had left the Persian Gulf Thursday bound for Singapore. On Friday at 0230 GMT, the vessel stopped for at least 9 hours east of a main Omani port before making a 360-degree turn and sailing toward Dubai, likely for damage assessment and repairs, he said.

The vessel came loaded with cargo from Europe. It discharged vehicles at several ports in the region, Raja added, including in Bahrain, the United Arab Emirates and Saudi Arabia, with its last port of call at Dammam.

Abraham Ungar, 74, who goes by “Rami,” is the founder of Ray Shipping Ltd., and is known as one of the richest men in Israel. He made his fortune in shipping and construction. Hebrew media reported that Ungar is close to Mossad chief Yossi Cohen.

Ungar said he did not know exactly what had hit the vessel, which had several holes, but it was most likely “missiles or a mine placed on the bow.”

“Israeli authorities will investigate this together with me,” he told the Ynet news site. “I don’t think this deliberately targeted an Israeli-owned ship, that has not happened to me before.”

Ungar said it was most likely linked to previous attacks on shipping in the area. “I think it is part of the game between Iran and the US, that’s why they are hitting Western ships.”

According to the Nikola Y. Vaptsarov Naval Academy, where Ungar provides support and maritime training, he owns dozens of car-carrying ships and employs thousands of engineers.

The US Navy’s Bahrain-based 5th Fleet was “aware and monitoring” the situation, Cmdr. Rebecca Rebarich told the AP. She declined to immediately comment further.

While details of the explosion remained unclear, two American defense officials told the AP that the ship had sustained two holes on its port side and two holes on its starboard side just above the waterline in the blast. The officials said it remained unclear what caused the holes. They spoke to the AP on condition of anonymity to discuss unreleased information on the incidents.

While the circumstances of the explosion remain unclear, Dryad Global said it was very possible the blast stemmed from “asymmetric activity by Iranian military.”

Hebrew media quoted unnamed Israeli officials as saying that they believed Iran was behind the blast. Channel 12, without giving sources, said the blast was caused by a missile fired from an Iranian vessel.

However, they said it was not clear that the Iranians would have known that the vessel was Israeli-owned.

As Iran seeks to pressure the United States to lift sanctions, the country may seek “to exercise forceful diplomacy through military means,” Dryad reported. Iran did not immediately acknowledge the incident.

The explosion on Friday recalled the summer of 2019, when the US military blamed Iran for suspected attacks on two oil tankers near the Strait of Hormuz, one of the world’s most strategic shipping lanes. In the preceding months, the US had attributed a series of suspected attacks to Iran, including the use of limpet mines — designed to be attached magnetically to a ship’s hull — to cripple four oil tankers off the nearby Emirati port of Fujairah. 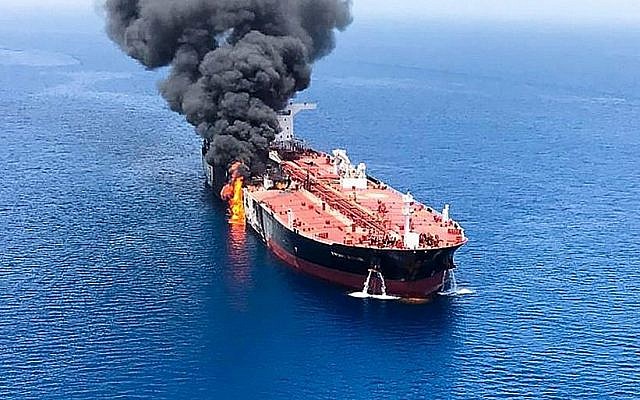 Illustrative: A picture obtained by AFP from Iranian News Agency ISNA on June 13, 2019, shows fire and smoke billowing from a tanker said to have been attacked in the waters of the Gulf of Oman, near the Strait of Hormuz. (ISNA/AFP)

Israel did not immediately comment on the blast. Since the killing of Fakhrizadeh, the Iranian nuclear scientist, last November, Israeli officials have raised alarms about potential Iranian retaliation, including through its regional proxies like Lebanon’s Hezbollah and Yemen’s Houthi rebels.

Over the years, Iran has been linked to attacks on Israeli and Jewish civilian targets in Latin America, Europe and Asia. Israel has not commented on its alleged role in the scientist’s killing.

Times of Israel staff contributed to this report