Exclusive: Tracking the flow of stolen Syrian oil into Iraq

Exclusive: Tracking the flow of stolen Syrian oil into Iraq

While the US role in looting Syria’s resources is well-documented, less is known about the complicity of Iraq's Kurdistan region in its transportation and distribution

By The Cradle's Iraq Correspondent

Although the porous Iraqi-Syrian border stretches for over 600 kilometers, about half of it – in practice – is not subject to the authority of either state. Over the years, this lack of comprehensive border control has given rise to a number of security threats to both nations, not least the persistent presence of ISIS elements in border regions.

From the Iraqi side, there has been a pro-active approach in countering this low-level terrorism with the establishment of two defensive lines by the Joint Operations Command, in addition to concrete barriers and watchtowers.

Smuggling from Syria into Iraqi border towns is another salient feature of current border activities, and one which presents both a threat and an opportunity for the US-led international coalition whose forces operate on both sides of the border.

The US loots and smuggles Syria’s oil

Under the guise of this international coalition, the US army controls the borders between Iraq and Syria, specifically at the Fishkhabour-Semalka crossing, the illegal Al-Waleed crossing between Iraqi Kurdistan and US-occupied Syrian territory, and the Al-Mahmoudiyah crossing. All of these border crossings have become notorious for the illicit smuggling of Syrian crude oil into northern Iraq, with direct involvement from US military forces.

Reconnaissance drones routinely hover over the skies of the region, and security is contracted out to private security firms by the US military. The employees of these companies, who travel in four-wheel drive vehicles under US air cover, are responsible for securing the transportation of Syrian oil to Iraqi territory – even though their mandate is solely to transport logistical equipment belonging to the international coalition.

When The Cradle reached the border area to investigate further, we were prevented from reaching beyond the joint control point of the Peshmerga and Asayish forces, the Kurdish military and intelligence agency forces, respectively.

This checkpoint reflects the security coordination between the Pentagon and the Ministry of Peshmerga in Iraqi Kurdistan, and is conducted without Baghdad’s knowledge or coordination. The central Iraqi government’s lack of awareness of the situation on its borders may be summed up in what one senior Iraqi security source told The Cradle: that the US troops were there “supporting Kurdish forces as part of the Iraqi defense system to combat terrorism.”

However, tribal sources confirm that under the cover of this “security zone,” illegal crossings between Iraq and Syria are active, with dozens of tankers passing weekly in convoys transporting smuggled Syrian oil, accompanied by US warplanes or helicopters.

Shepherds in the region also corroborate these claims, and indicate that the Syrian oil is transported to the Harir military site in Erbil, the capital of the Kurdistan region of Iraq (KRI), for the benefit of the Kurdish oil company KAR Group, owned by Sheikh Baz Karim Barzanji, who is close to the family of the head of the Kurdistan Democratic Party (KDP), Massoud Barzani. 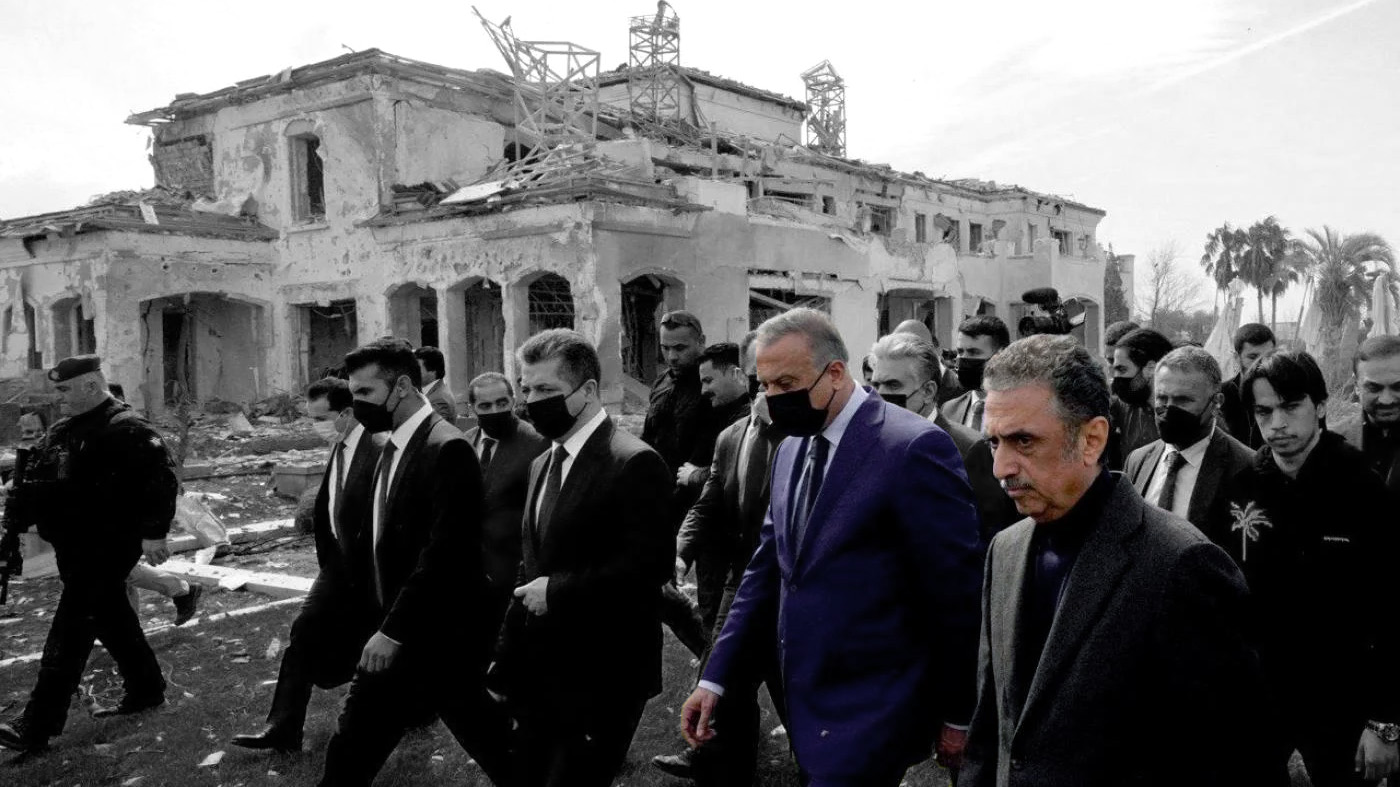 The latter has strong relations with the new so-called “Club of Influential Countries” in Iraq, in reference to the UAE and Turkey. Barzani also maintains a strong relationship with the US-backed, Kurdish-led Syrian Democratic Forces (SDF) in Syria, whose members have been protecting convoys of Syrian oil tanks.

Sheikh Baz came under some scrutiny in March when one of his villas, reportedly used as a safe house by Israel’s Mossad spy agency, was struck by Iranian Revolutionary Guard Corps (IRGC) missiles, killing and injuring agents inside.

At the time, Kurdish politician Hiwa Seid Salim told The Cradle he suspects the reason for the Iranian attack on Sheikh Baz’s villa was due to his business activities, which Iranian security sources say includes selling Iraqi (or Syrian) oil and gas to Israel.

Sheikh Baz was one of the channels of communication between the KDP and government of Saddam Hussein on the transportation of Iraqi oil to Turkey during the economic embargo on Iraq. After the 2003 US invasion, he worked with USAID and transformed his construction contracting company – set up in the 1990s – into an oil conglomerate.

The logistics of the looting

Speaking to The Cradle, a former Iraqi diplomat points out that the theft of Syrian natural resources witnessed a significant increase when former US President Donald Trump came to power. At that time, he told Iraqi officials that “Syrian oil is a cheap price for Washington’s contribution to the fight against ISIS.”

While it is not possible to accurately determine the quantities of looted oil, Iraqi tribal sources confirm that the tanker journey takes approximately 48 hours through the main crossings, approved by the US army (Fishkhabour, Al-Waleed or Al-Yaarubiyah), in a process that only pauses for brief periods to fill their tanks.

According to these sources, there are usually no less than 70 to 100 tankers transporting Syrian oil during each journey.

Inside Syria, tanker convoys travel through areas outside the authority of the central state. The trip starts from the Syrian Al-Jazira region and passes through Al-Hasakah, where it stops for hours before continuing to one of the border outlets to procure supplies, and then proceeds to the Harir site in Erbil in the KRI.

There, the oil is emptied into other tanks that carry it to the US base at Ain al-Assad in Iraq’s Anbar province, or to Halabja province, where another US military base is located. 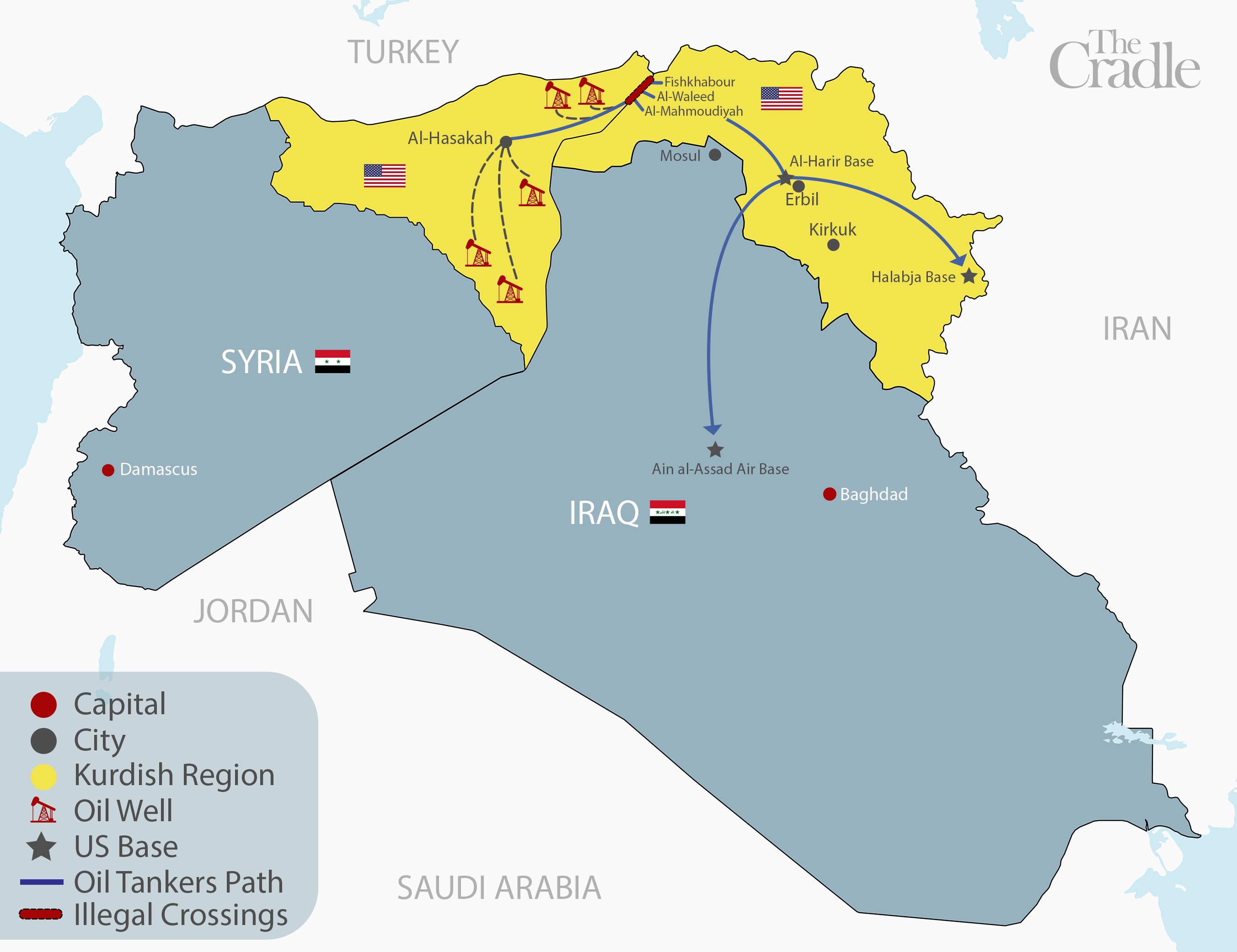 Map depicting the transportation of stolen Syrian oil to Iraq

The transfer of tankers from Kurdistan to the Ain al-Assad base or any other US military site must obtain prior approval from the National Operations Center. Therefore, these transfers take place under the guise of “logistical support for the international coalition forces,” according to one Iraqi security source in close contact with the US. Although Baghdad is unlikely to be completely kept in the dark about this repeated violation of Iraq’s sovereignty and territorial integrity, it appears to have very little say in the matter.

The source tells The Cradle that the tankers’ journey through the Al-Qaim-al-Bukamal crossing would have been shorter had this crossing not been under the control of armed Iraqi factions that accuse Prime Minister Mustafa al-Kadhimi of “opening the doors” for the Americans.

The same security source points out that these factions “have not stopped calling for the withdrawal of US forces from Iraq, which continue their security and intelligence work inside the state under the cover of providing security and military advice to the Iraqi forces in the fight against terrorism.”

How much does the Iraqi government know?

The US military’s “advisory work” is ostensibly limited to providing Iraqi forces with some satellite images of the ISIS presence in the mountains in northern Iraq. However, this information is arguably already attainable by Iraqi authorities without US help, according to sources in the military joint operations room, the highest military and security authority in Iraq.

The Cradle attempted to reach out to officials in the Iraqi government for a comment on what is happening at Iraq’s border crossings, but there was no response.

A political source attributed this non-response to “political fragility,” whereby it has become common for decision-makers to avoid commenting on what is considered “sensitive” information. This is particularly the case at a time when Iraq is undergoing political uncertainty while very tentatively emerging from its economic crisis.

There are positive steps recently undertaken by the Iraqi authorities, including a recent meeting by the country’s border guards with Syrian army officers in Baghdad – the first of its kind since 2021 – aimed at strengthening cooperation and fortifying the border against terrorism and smuggling networks.

Yet Baghdad’s failure to confront and clamp down on the illegal transportation of stolen Syrian oil into Iraq further cements – and confirms – the perception of a number of Iraqi factions that the government of Mustafa al-Kadhimi is a mere puppet in American hands.

The views expressed in this article do not necessarily reflect those of The Cradle.