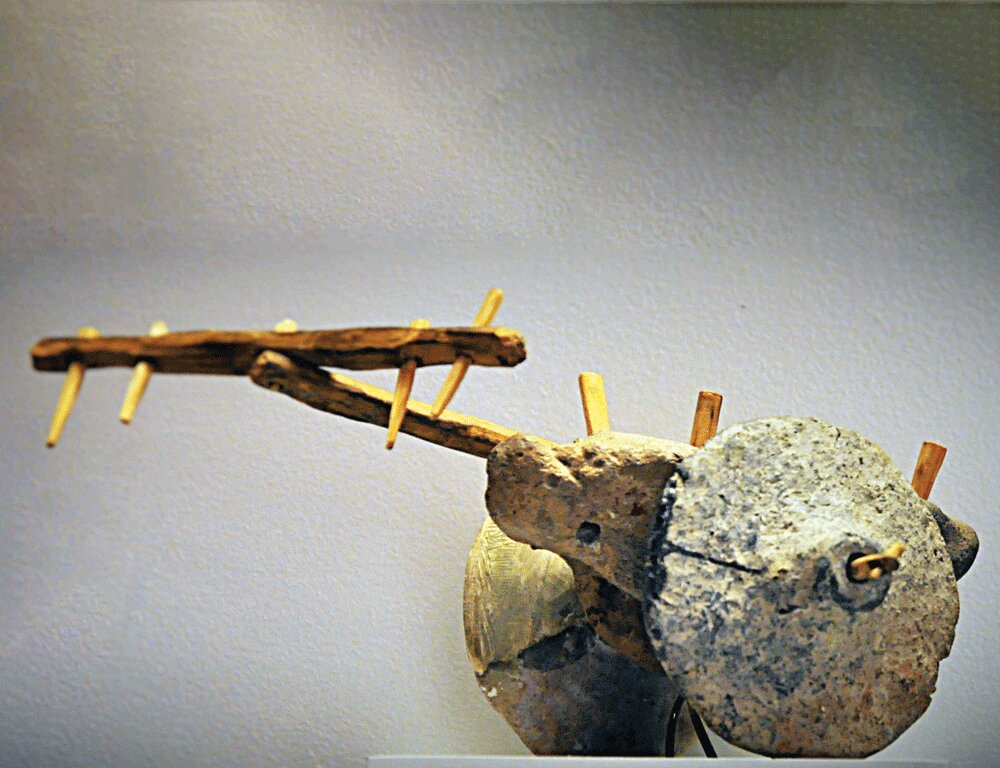 TEHRAN – Iran has recently unearthed a rare Bronze Age culture, related settlements and relics following to rounds of excavation in a plain near the north-central city of Qom.

“Archaeological excavations carried out at a broad natural sandy-gravel hill named Tepe Yousef Khan has revealed relics and remains which are related to the Kura–Araxes culture known as one of the most developed Bronze Age cultures of the time,” IRNA quoted senior Iranian archaeologist Siamak Sarlak, who led the excavations, as saying on Tuesday.

The Kura–Araxes culture, also called the Early Transcaucasian culture, was a civilization that existed from about 4000 BC until about 2000 BC, which has traditionally been regarded as the date of its end; in some locations, it may have disappeared as early as 2600 or 2700 BC. The earliest evidence for this culture is said to be found on the Ararat plain; it spread northward in the Caucasus by 3000 BC. 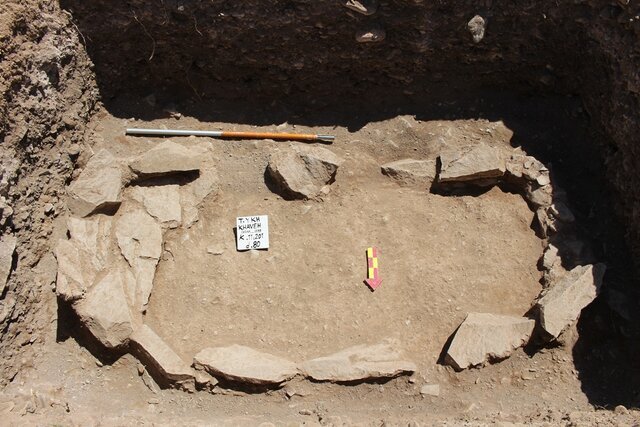 Talking about the discovery, Sarlak explained that in 2019 wintertime a digging was held by locals in Khaveh village to develop economic and agricultural activities. It, however, led to the accidental discovery of the pottery vessels and human remains in an ancient cemetery located beneath a natural hill named after its private owner, Yousef Khan.

Following reports to the Ministry of Cultural Heritage, Tourism, and Handicrafts, a team of archaeologists led by Sarlak started an extensive survey at the site under the supervision of the Iranian Center for Archaeological Research (ICAR).

“Samples of burial remains have been lent to [archaeological institutions in] Denmark and Italy for further genetics studies and other related examinations under memoranda of understanding the institutions have previously inked with Iran’s Cultural Heritage and Tourism Research Institute.”

Elsewhere in his remarks, Sarlak explained that the discovery of Yousef Khan cemetery and the preliminary results of the research conducted in this area has led the team to clarify some ambiguous points in the archeology of the Bronze Age in Qom plain.

“Moreover, the documents obtained from Yousef Khan cemetery showed that the direct presence of the Kura–Araxes culture in Qom plain often seems to be limited to its southern mountainous areas …”

The head of the archeological excavation added: “Undoubtedly, such conclusions are only a temporary assumption and are based on the present evidence, and such assumption will remain the same until the completion of surveys in the plains and mountains of the Qom region.”

Referring to the geographical location of the archaeological site, he noted that Yousef Khan cemetery indicates the direct evidence of the Kura–Araxes culture, which is located at an altitude of 2000 meters above sea level in the foothills south of the Qom plain. 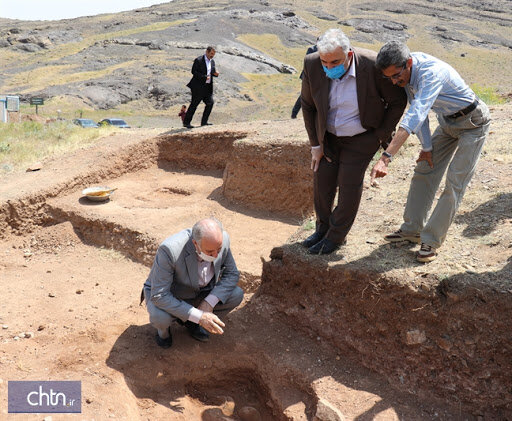 According to Sarlak, the third point indicates some archaeological evidence that this culture had coexistence, interaction, and connection with the native culture of the region.

Archaeological excavations carried out at a broad natural sandy-gravel hill named Tepe Yousef Khan has revealed relics and remains which are related to the Kura–Araxes culture known as one of the most developed Bronze Age cultures of the time.“For confirmation of this assumption, concerning the simultaneous presence of pottery traditions scattered in the region, we adopted the flowing as criteria for the graves of Yousef Khan hill: 1) - Kura–Araxes culture (scorched black and red-brown pottery, utensils with so-called Nakhchivan handles, the use of embossed decoration on handmade pottery). 2) pottery traditions of the native culture (pea-colored potteries and simple brick-making earthenware, and containers with gutter-shaped catchment) .”

Talking about their occupation; their source of income, the senior archaeologist noted: “The available evidence suggests that the Kura–Araxes communities were based in the valleys of the mountainous regions south of Qom, relying on livestock breeding for their economic and that their settlement pattern was likely based on nomadic or semi-nomadic migration.”

“Dating of the graves is difficult because, after the collapse of late 4th millennium BC large sites in the central Iranian plateau, there are no known nearby settlements dated to the 3rd millennium. However, by analogy to more distant sites and based on pottery, cylinder seals and metal objects, a preliminary date within the middle 3rd millennium BC has been proposed for the cemetery,” according to a paper jointly written by Arkadiusz Soltysiak, Siamak Sarlak, and Hadi Rafiei.

Human remains from Khaveh were studied in 2019 in the facilities of the Department of Archaeology, University of Kashan, using the standard protocols presented in Buikstra and Ubelaker with some modifications. In total, the skeletal remains of seven individuals were identified, including six adults and one infant, likely a neonate. All retrieved elements were extremely eroded and fragmented, with mostly only pieces of long bone shafts being identified.

Based on general robustness, two individuals were assessed as more likely females than males and one as more likely male than female. Age-at-death assessment was possible only in the case of the best-preserved skeleton, having two teeth exhibiting a moderate-high degree of dental wear, therefore suggesting that it was a mature individual.

Sources say that the economy of the Kura–Araxes communities was based on farming and livestock-raising (especially of cattle and sheep). They grew grain and orchard crops, and are known to have used implements to make flour. They raised cattle, sheep, goats, dogs, and in later phases, horses. 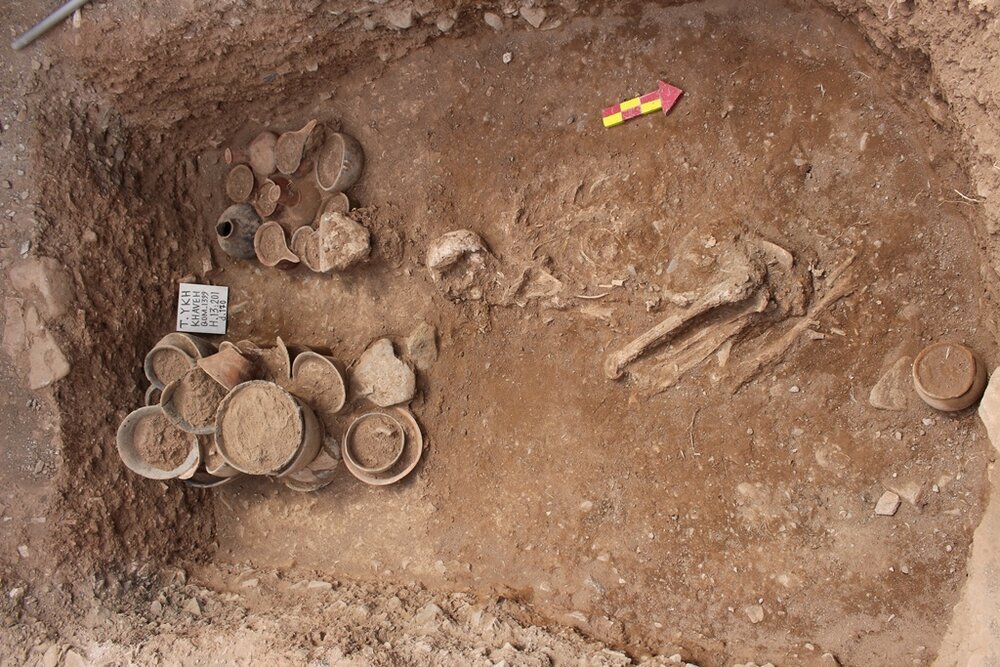 Before the Kura-Araxes period, horse bones were not found in Transcaucasia. Later, beginning about 3300 BC, they became widespread, with signs of domestication. There is evidence of trade with Mesopotamia as well as Asia Minor. It is, however, considered above all to be indigenous to the Caucasus, and its major variants characterized (according to Caucasus historian Amjad Jaimoukha) later major cultures in the region.

From the Caspian in the northwest to Baluchistan in the south-east, the Iranian Plateau extends for close to 2,000 km. It encompasses the greater part of Iran, Afghanistan and Pakistan west of the Indus River containing some 3,700,000 square kilometers. In spite of being called a “plateau”, it is far from flat but contains several mountain ranges, the highest peak being Damavand in the Alborz mountain range at 5610 m, and the Dasht-e Loot east of Kerman in Central Iran falling below 300 m.

The first well-documented evidence of human habitation in the Iranian plateau is in deposits from several excavated cave and rock-shelter sites, located mainly in the Zagros Mountains of western Iran and dated to Middle Paleolithic or Mousterian times (c. 100,000 BC).