Institute for Science and International Securit

On June 5, 2020, the International Atomic Energy Agency (IAEA) provided some limited detail on three locations for which it was seeking, unsuccessfully, additional information and clarification from Iran regarding past activities having potential IAEA safeguards relevance, in particular involving the use and storage of undeclared nuclear material. The third of those three locations was stated as being, “where outdoor, conventional explosive testing may have taken place in 2003, including in relation to testing of shielding in preparation for the use of neutron detectors.”1 The IAEA added: “From July 2019 onwards, the Agency observed activities consistent with efforts to sanitize part of the location.”

The IAEA did not name this site, but by providing the timing of when the site was razed, it became clear that the IAEA is referring to a site revealed earlier by Israel. On September 9, 2019, Israeli Prime Minister Benjamin Netanyahu held a press conference revealing the existence of a previously clandestine nuclear weapons development site, located approximately 24 kilometers north of the town of Abadeh, in central Iran. The Prime Minister said that the remote site was discovered by Israel as a result of its acquisition of the Nuclear Archive materials from an innocuous warehouse in Tehran in May 2018, signifying the site’s connection to the “Amad Plan,” Iran’s crash nuclear weapons program in the early 2000s.2 The site was only described as having been engaged in conducting “experiments to develop nuclear weapons.” However, the Prime Minister went on to say that once Iran became aware of Israel becoming witting to the existence of the site, the Iranians quickly destroyed the entire site between late June and late July 2019. Figure 1 is taken directly from the Prime Minister’s presentation. 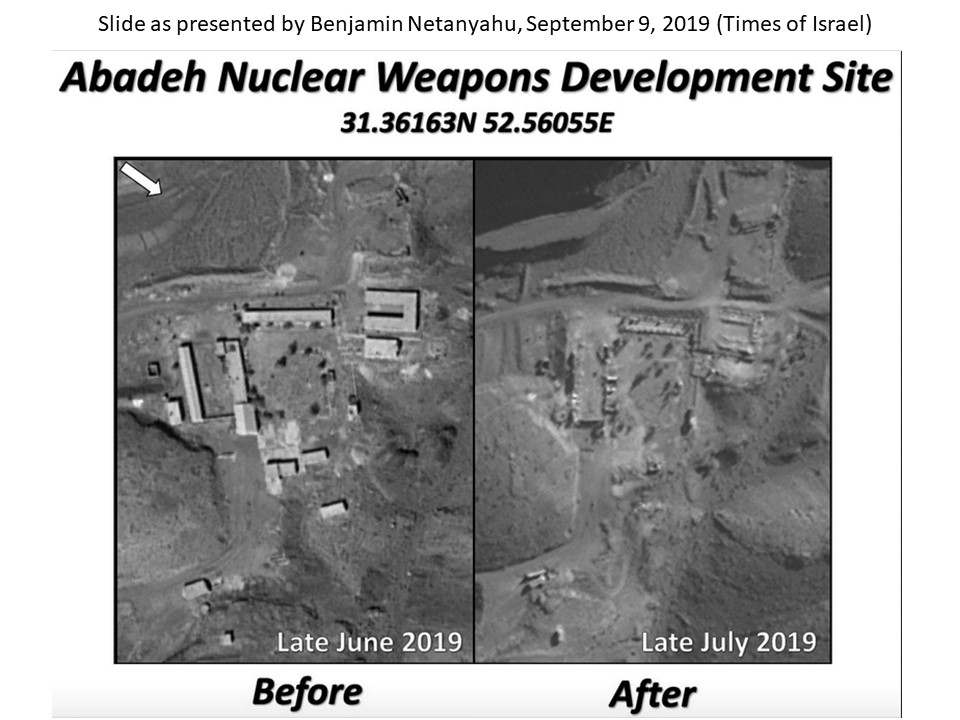 Figure 1. Prime Minister Netanyahu used these before and after pictures of Abadeh to show the site’s abrupt razing in July 2019.

A Closer Look at Abadeh

Following the Prime Minister’s announcement, the Institute started collecting additional commercial satellite imagery for analysis from the available historical archive of the Abadeh Site, using the coordinates provided by Israel in Figure 1. Figure 2, a December 2015 Google Earth image, provides a perspective view of the Abadeh site, located remotely in a mountain range near the town of Abadeh. The figure shows the general layout of the site: a cluster of key buildings labeled “Development Site,” hidden behind a hill from view from the main access road, with a security checkpoint at the entrance. The Institute was able to identify a possible outdoor explosives test area northeast of the Development Site, accessible via dirt roads. 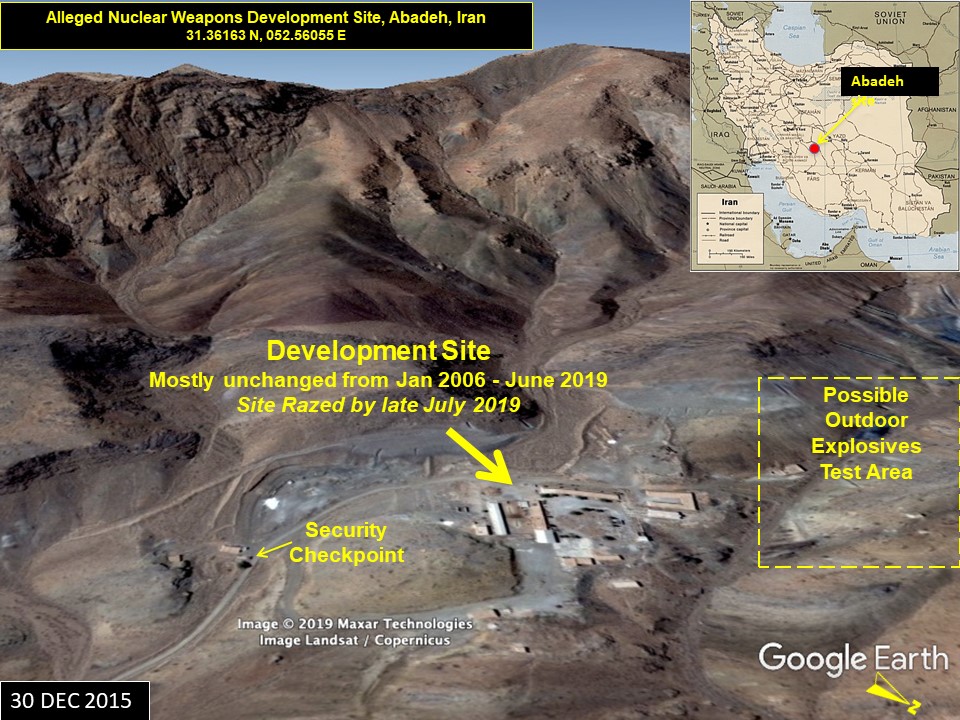 Figure 2. The layout of the Abadeh site before razing shows features consistent with a secret high explosives testing site.

Figure 3 provides a high-resolution overview using an image found on Apple maps. The image is undated, but estimated to be from early 2013, based on a small structure, which appears to be temporary and was also present in a May 2013 Google Earth image. While the site appears mostly unchanged from January 2006 up until its razing, the 2013 image is one in a series of images indicating at least light activity at the site post-2003. The figure identifies a possible main laboratory building at the Development Site, and key structures of the possible outdoor explosives test area: a primary and secondary possible firing and diagnostics building, and a small tunnel. The image further shows that the area was at one time engaged in mining, indicated by numerous linear prospecting scars typical of those dug by backhoes. The mining was most likely for refractory illitic clay for ceramics, as the Abadeh region is the home of one of the largest refractory clay mines (Esteghlal Mine) in the Middle East for the manufacture of ceramics and high temperature fire-bricks for kilns.3 If this site was originally a mining support camp and later co-opted by the Amad project, circa 2002 and beyond, it would be less likely to raise suspicion if it were to have been used for high explosive testing (given that it is located in a known mining environment). 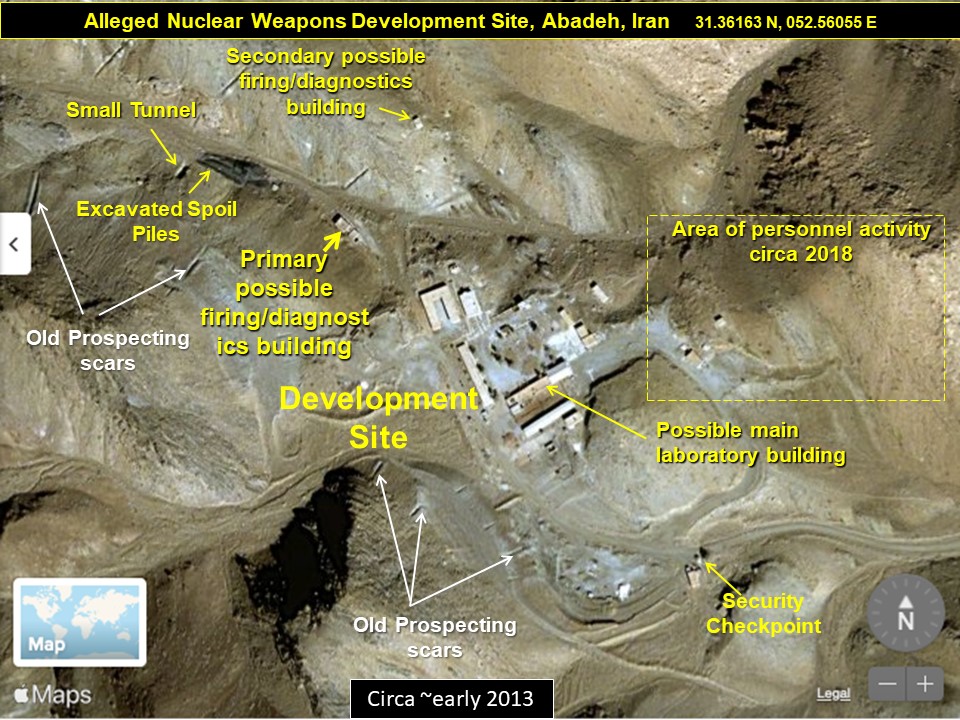 Figure 3. A high-resolution image of the site identifying a possible laboratory building at the Development Site (the cluster of key buildings that make up the center of the site), the key structures comprising a possible outdoor explosives test area, a security checkpoint, and an area where personnel tracking was notable on imagery of 2018 (see Figure 10).

Figure 4 provides another direct comparison of the before and after razing of the Abadeh site, but this time in color, using images made available by Maxar Technologies, dated March 27, 2019, and August 12, 2019.4

Figure 5 provides a close-up of the Development Site before and after razing (with the two images taken in 2012 and 2020 respectively). The key buildings were clustered together with fencing that formed a secured courtyard area. Those buildings included a peaked roof high bay shop building, a flat roofed building that could have served as a primary laboratory building, along with two longer single-story peaked roof office or shop buildings. 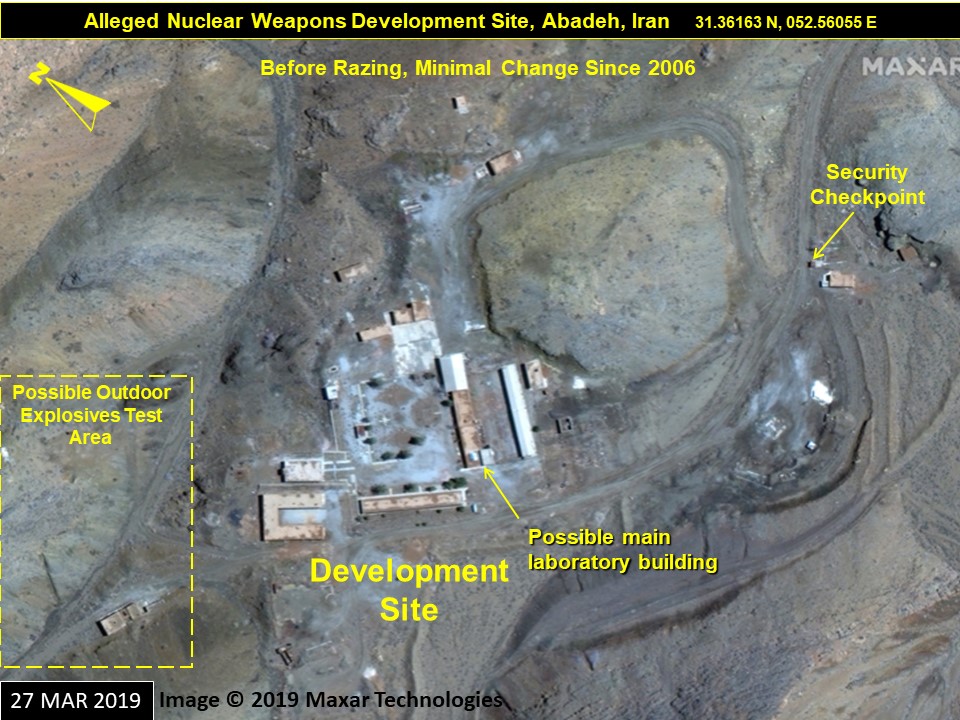 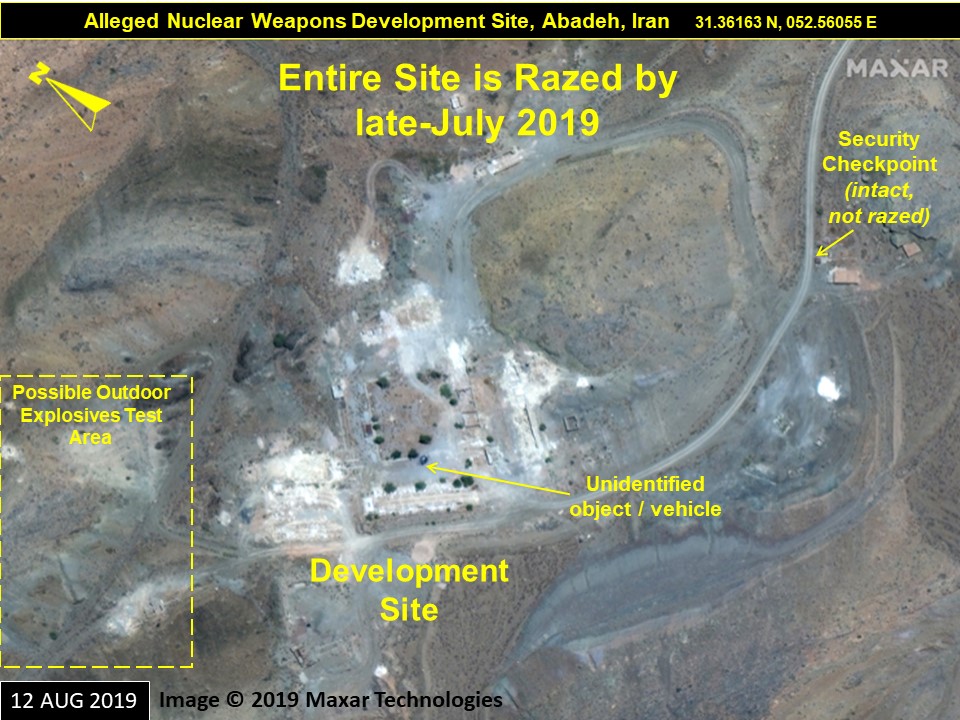 Figure 4. High-resolution color images show the Abadeh site before (March 2019, above) and after (August 2019, below) it was razed. Only few structures were left intact, including parts of a security checkpoint that were partially dismantled later, between late November and late December 2019. In the lower August 2019 image, a possible vehicle can be seen in a previously open area of the development site. 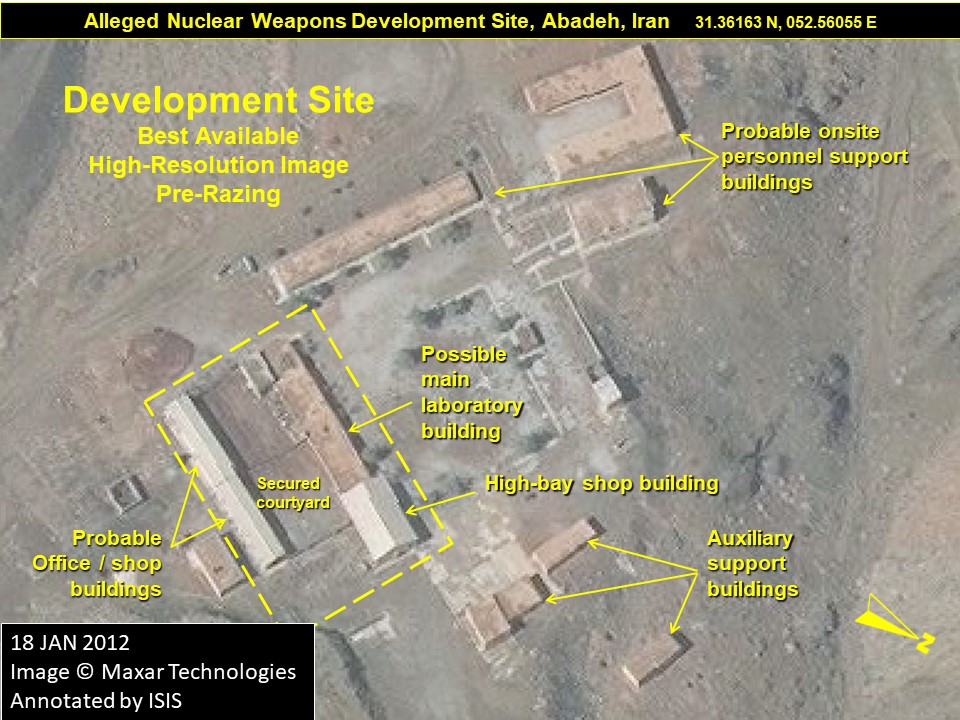 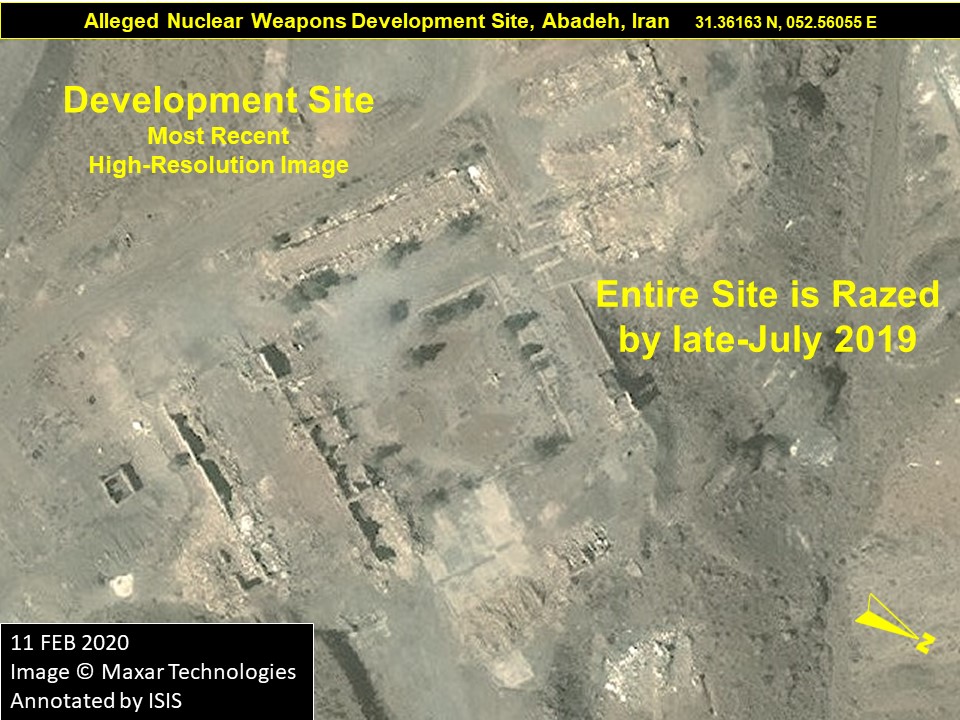 Figure 5. A close-up of the Development Site before (above) and after (below) razing. 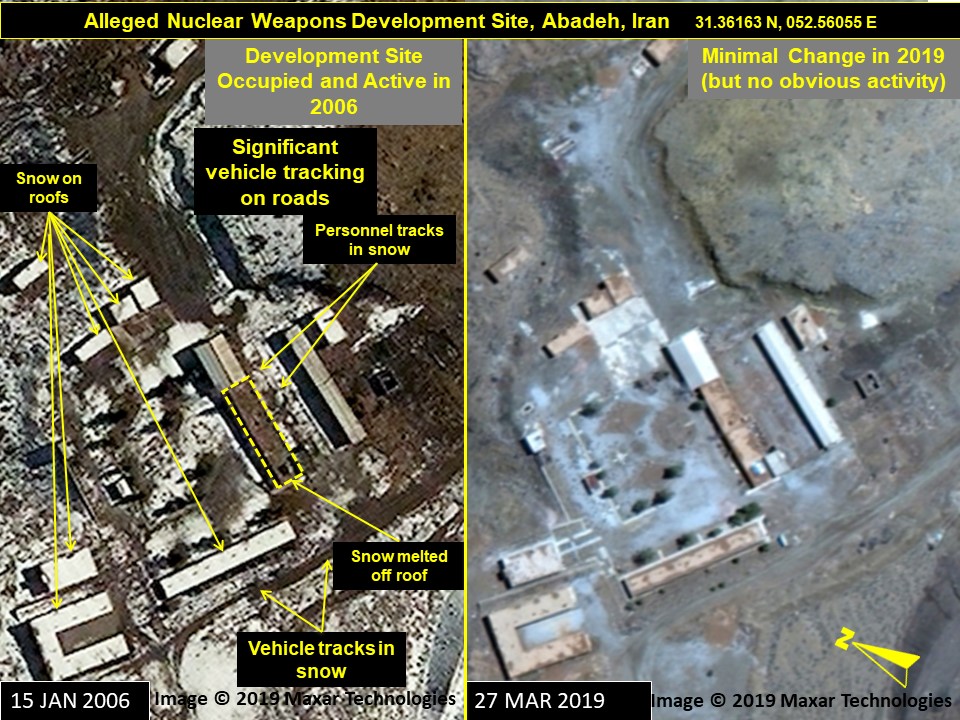 Figure 6. The Abadeh site remained largely unchanged for over a decade up until its razing in July 2019.

Figure 6 contains a 2006 commercial satellite image; the Institute does not have earlier images of the site, particularly from 2002/3 when the Amad Plan was most active. The 2006 image on the left shows the presence of some personnel onsite as of early 2006, signaled by snow melt on some key building roofs and both personnel and vehicle tracking visible in the snow. The 2019 image on the right shows the site remained largely unchanged between 2006 and 2019.

Figure 7, a January 9, 2019 image, focuses on an area northwest of the Development Site that could have been involved in such high explosives testing as indicated in the latest IAEA report. The area, labeled “possible outdoor test area,” consists of two candidate facilities. The first one, labeled as the “primary possible firing/diagnostics building”, exhibited some of the characteristics one might expect for a hydrodynamic test facility with a fire control room section situated behind a potential camera recording section facing an open pad that could be used to conduct high explosives testing at close range uphill and away from the rest of the Development Site (See Figure 9). A secondary possible firing/diagnostics building (a single, small, outlier building) is located in a small isolated valley to the north of the primary one. The primary building has a middle section with no walls, making it look like the fire control section would be shock isolated (the center section was effectively just a corridor) from the camera room section, which would be taking the main shock from any explosive detonations.

Figure 8 shows the possible outdoor test area in greater detail, along with a number of other identifiable features nearby, in 2013. 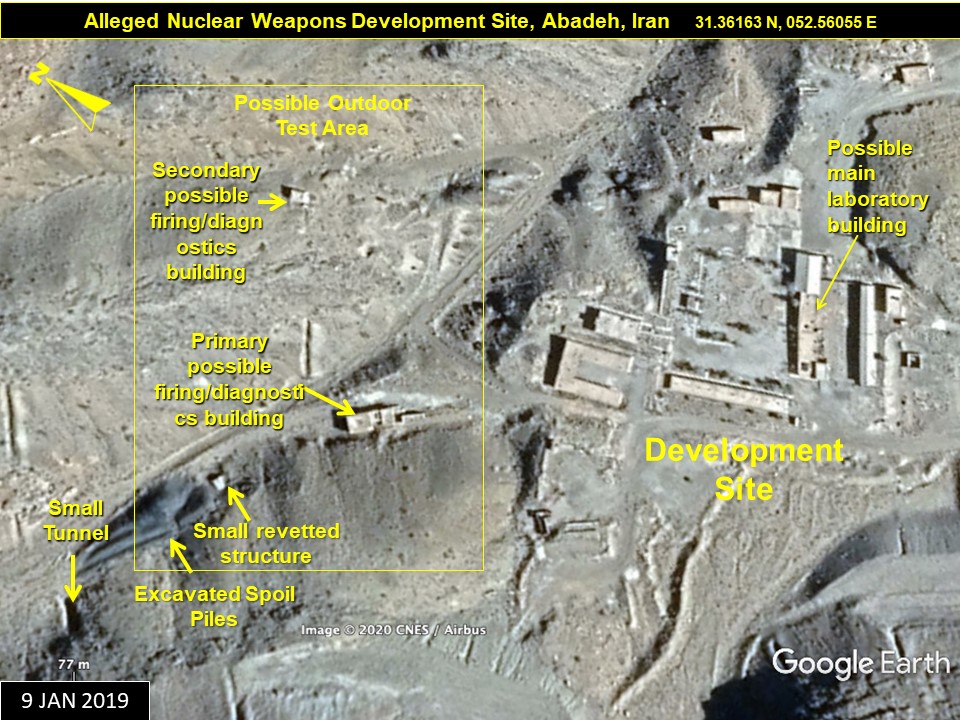 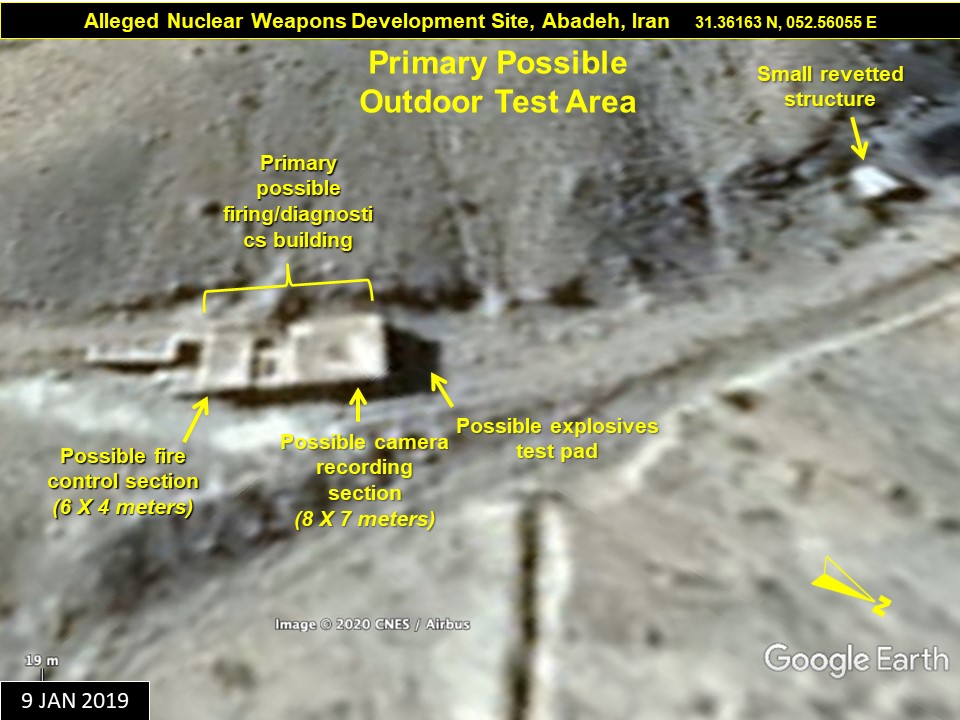 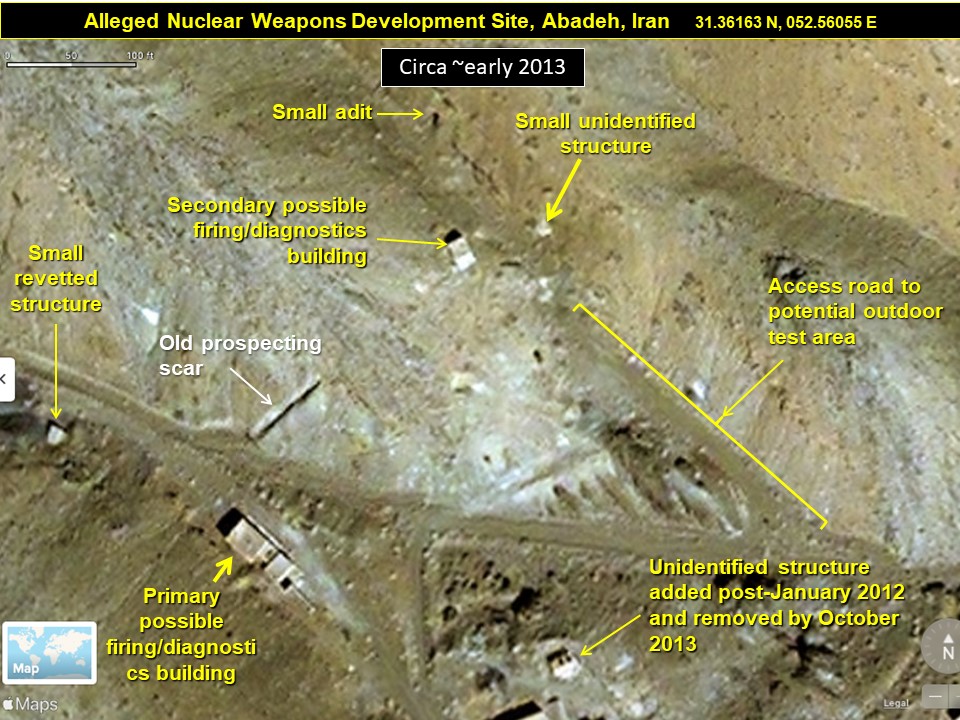 Figure 8. The possible outdoor high explosives testing area in about 2013.

Figure 9 provides a comparison of the possible outdoor test area, before and after razing using imagery from 2012 and 2020. Both the primary and secondary possible firing/diagnostics buildings were razed in July 2019, at the same time as the rest of the Abadeh site. For additional comparison purposes, exemplar images of known high explosive test buildings are shown in the insets with dimensions. The larger one is located in the USA, while the smaller one was involved in the early development of nuclear weapons in South Africa. 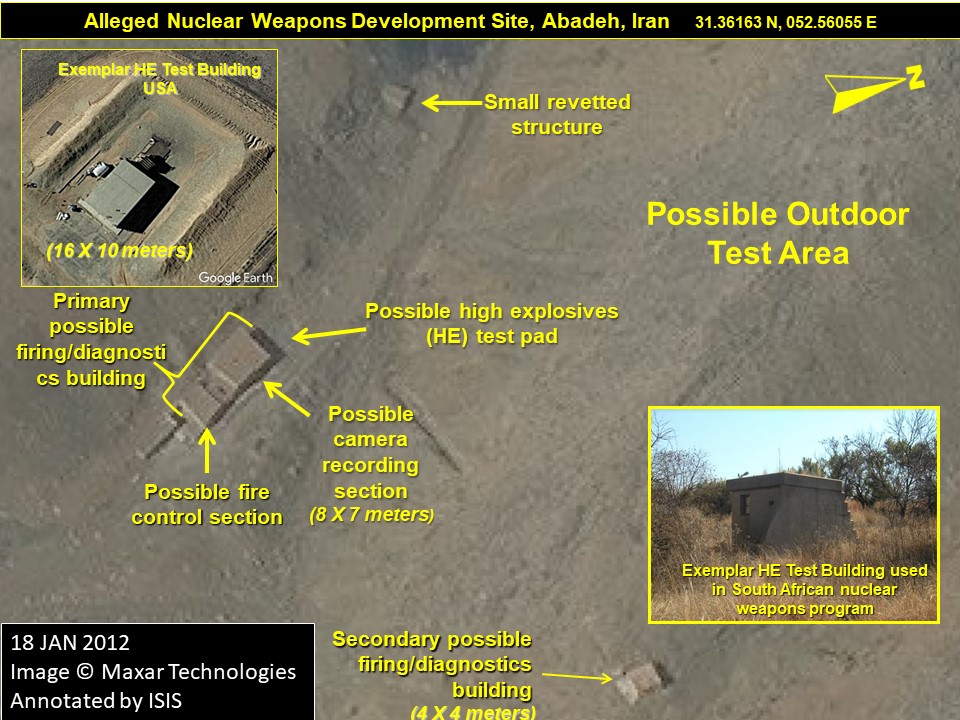 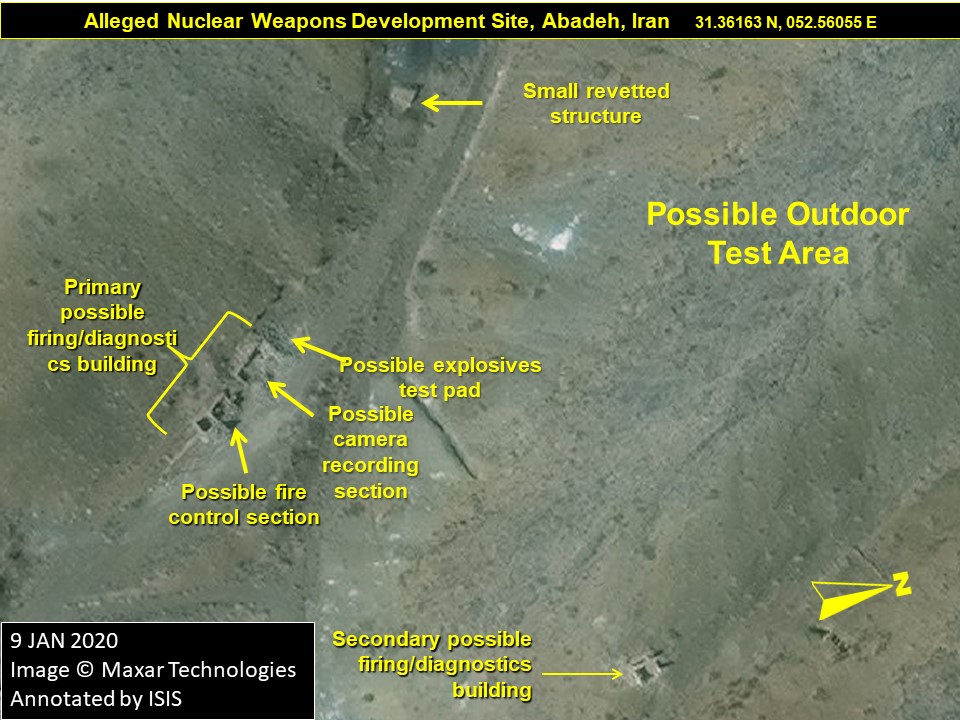 Figure 9. A close-up of the possible outdoor high explosives testing area before and after the razing that occurred in July 2019.

Figure 10 shows a series of images recording activity at the site between 2016 and mid-2018. From top left to bottom right, images show the establishment of a trail that is first faint, but well-worn by July 2018. Small structures appear on the hillsides between June 2016 and July 2018, possibly security structures, which may still be intact after the razing of the main site on imagery from February 2020. 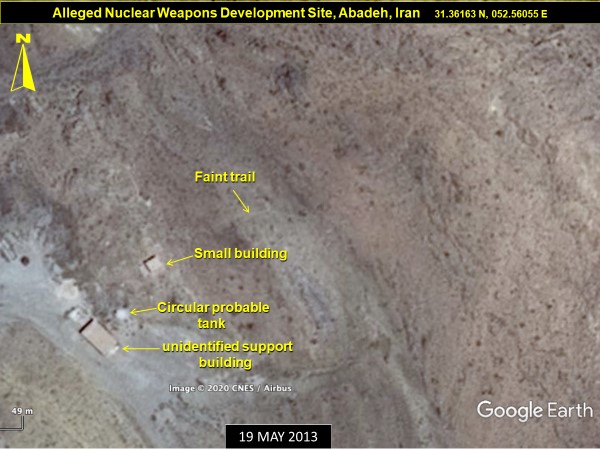 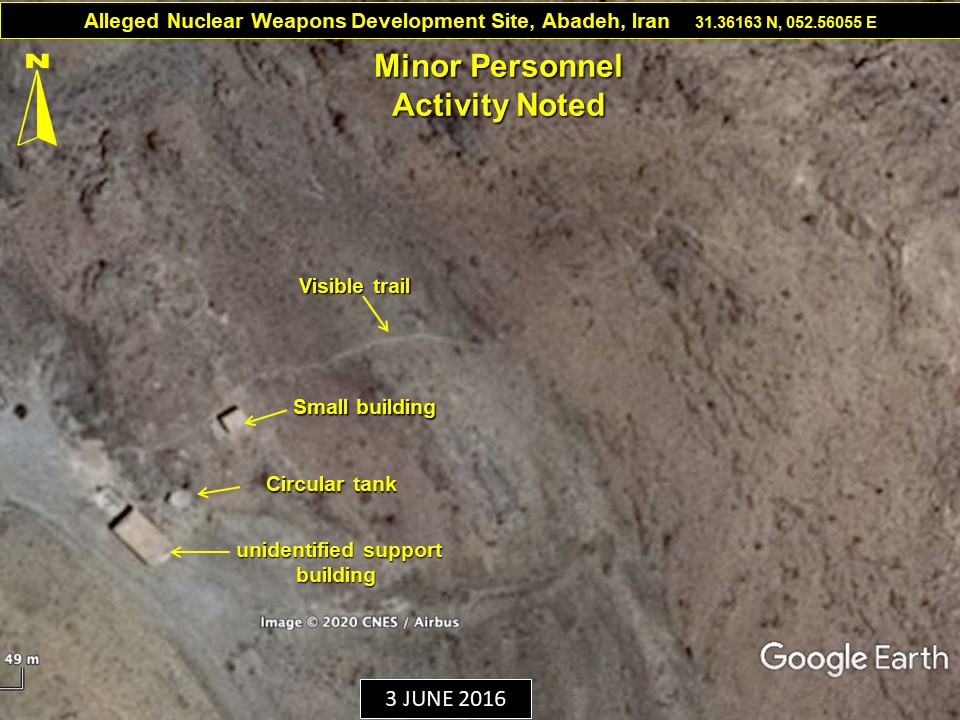 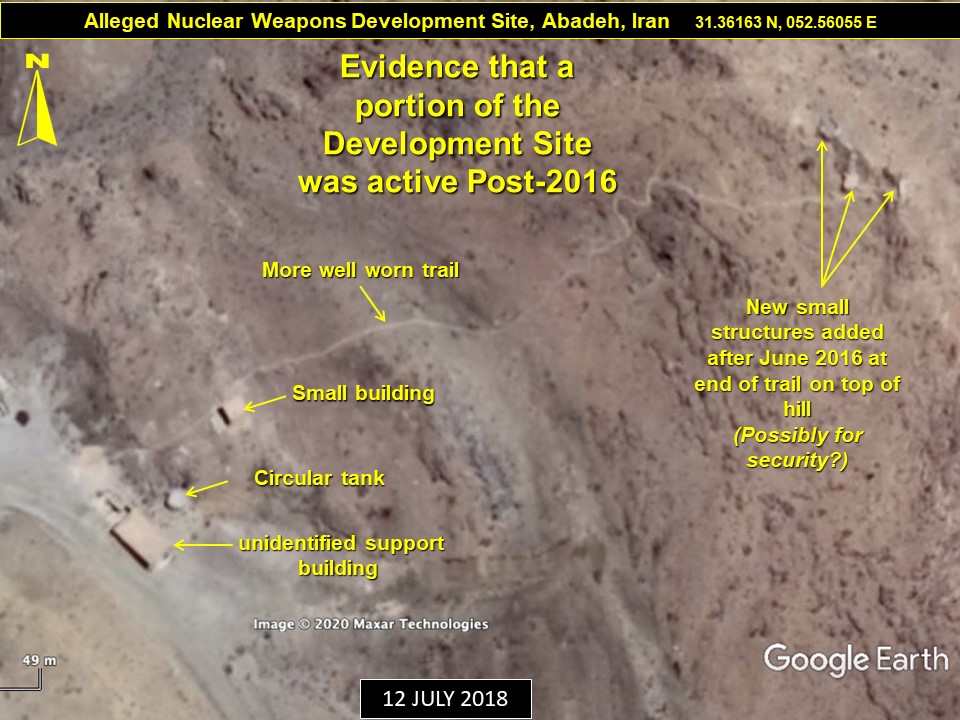 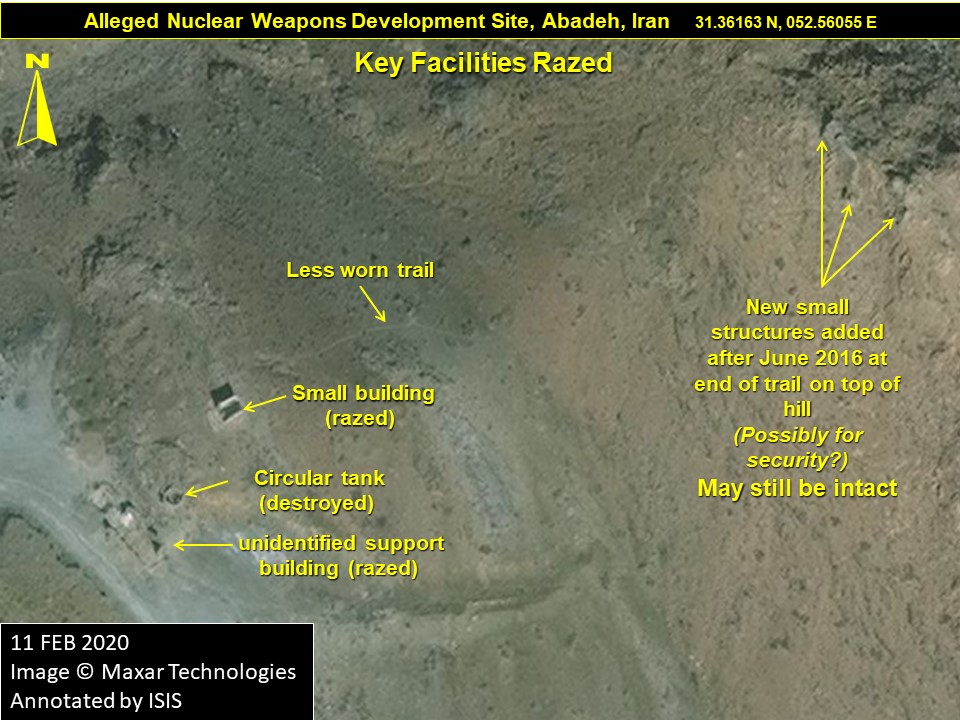 Figure 10. Chronologically, top left, top right, bottom left, and bottom right show signs of activity including an increasingly well traveled path and the construction of small structures on a hilltop between June 2016 and July 2018, with the latter structures appearing to have remained intact into 2020.

Based on all the available information, the Abadeh Development site is the location currently in question by the IAEA, thought to have been involved in outdoor high explosives testing in the 2003 timeframe. After 2003, when commercial satellite imagery is available, the site has exhibited evidence of personnel presence, such as in a 2006 satellite imagery, and lighter signs of activity around 2012 and 2013, and again around 2018, which may have continued up until its razing in mid-summer 2019.

The Abadeh site was apparently preserved for some time after 2003. Abadeh is in a very remote part of Iran, possibly leading the Amad Plan leaders to leave it intact post-2003, either for additional testing or on stand-by.

The site’s razing in July 2019 is an extremely suspicious act, given its timing following the Israeli seizure of the Nuclear Archive in January 2018, and also following or coinciding with the July 5, 2019 letter to Iran from the IAEA,5 marking the beginning of the IAEA asking official questions about the origin of undeclared uranium detected at another site. Even completely abandoned sites in Iran are not razed, despite being idle for decades (e.g., the abandoned Talmesi uranium mining camp located near the Pasmangoor Radioactive Waste Site near Anarak, Iran6).

With the revelation of the archive, followed by increased IAEA interest, its inspectors now armed with highly specific information about Iran’s nuclear weapons-related work at this testing location, Iran may have reckoned it was time to raze the site in the summer of 2019, worried about an IAEA request to visit. With the ability of the IAEA to detect undeclared uranium at Turquz Abad in 2019, despite extensive sanitization, Iran may have subsequently decided that denial of access is also necessary to prevent the IAEA from gathering additional evidence of undeclared nuclear material and nuclear-related activities. Obtaining access now requires strong action by the Board of Governors and likely the United Nations Security Council.