By Moon of Alabama

From the mouth of Mossad:

The United States and Israel worked together to track and kill a senior al-Qaida operative in Iran earlier this year, a bold intelligence operation by the two allied nations that came as the Trump administration was ramping up pressure on Tehran.

Four current and former U.S. officials said Abu Mohammed al-Masri, al-Qaida’s No. 2, was killed by assassins in the Iranian capital in August. The U.S. provided intelligence to the Israelis on where they could find al-Masri and the alias he was using at the time, while Israeli agents carried out the killing, according to two of the officials. The two other officials confirmed al-Masri’s killing but could not provide specific details.

The story is laughable. If any important al-Qaeda guy had been killed last August Trump would have screamed about it during his campaign from the top of his lungs. 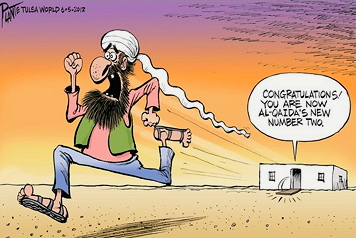 There have since been quite a few more of these:

Being Al-Qaeda's number 2 is a dangerous job!

As No.2 one might be media-killed anytime the U.S. seeks a pretext to ramp up sanctions on Iran.